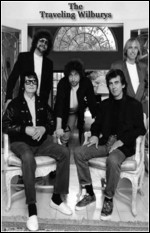 The Traveling Wilburys (sometimes shortened to the Wilburys) were a British-American supergroup consisting of Bob Dylan, George Harrison, Jeff Lynne, Roy Orbison, and Tom Petty. The band recorded two albums, the first in 1988 and the second in 1990, though Orbison died before the second was recorded.

The project's work received much anticipation given the diverse nature of the singer-songwriters. Debut album Traveling Wilburys Vol. 1 proved an enduring critical success, in 1989 and 1990 winning accolades such as a Grammy for Best Rock Performance by a Duo or Group.

George Harrison first mentioned the Traveling Wilburys during a radio interview with Bob Coburn on the Rockline radio station in February 1988. When asked what he planned to do as a follow-up for his Cloud Nine album, Harrison replied: "What I'd really like to do next is... to do an album with me and some of my mates... a few tunes, you know. Maybe the Traveling Wilburys... it's this new group I got: it's called the Traveling Wilburys, I'd like to do an album with them and later we can all do our own albums again."[1] "Wilbury" was a slang term first used by Harrison during the recording of Cloud Nine with Jeff Lynne. Referring to recording errors created by some faulty equipment, Harrison jokingly remarked to Lynne, "We'll bury 'em in the mix".[2][3] Thereafter, they used the term for any small error in performance and the term was used again when the group were together. Harrison suggested "The Trembling Wilburys" as the group's name; instead, Lynne suggested "Traveling", with which the group agreed. Video footage of the creative process was partly shot by British photographer NJ Latham and later edited by George Harrison.[2]

Starting with a meal shared by Harrison, Lynne and Roy Orbison, the group came together at Bob Dylan's home studio in Malibu, California, to record an additional track as a B-side for the single release of Harrison's "This Is Love". Tom Petty's involvement came by chance, as Harrison had left his guitar at Petty's house, and the invitation for Petty to join the session was made when Harrison went to retrieve it.[4] The record label, however, decided that the song that resulted, "Handle with Care", was too good to be released as a "single filler." The members enjoyed working together so much that they decided to create a full album together, Traveling Wilburys Vol. 1. Written by all five men, it was recorded over a ten-day period in May 1988, and released on October 18. The album was recorded in the house and garden of Eurythmics member Dave Stewart.[5] The "Wilburys" joke was extended further, with the band members credited under various pseudonyms and pretending to be half-brothers – sons of a fictional Charles Truscott Wilbury, Sr.[6] The album was a critical and commercial success, spawning several successful singles and eventually reaching triple-platinum sales status in the U.S. The album was nominated for several awards and won the Grammy Award for Best Rock Performance by a Duo or Group in 1989. Liner notes on the album cover were written by Michael Palin under a pseudonym. On the second album they were written by Eric Idle under a pseudonym.

Roy Orbison died of a heart attack on December 6, 1988. In tribute to Orbison, the music video for "End of the Line" shows Orbison's guitar rocking in a chair as the rest of the group play, followed by a brief shot focusing on a framed picture of him. Despite Orbison's death, the remaining group members recorded a second and final studio album, which they intentionally misnumbered Traveling Wilburys Vol. 3. It was released on October 30, 1990, and met with less success than the previous one. (In the booklet contained in the 2007 box set, the album title is credited to "George being George";[7] apparently Harrison was making a wry reference to the appearance of a bootleg that served as a sort of Volume 2.[8])

After his 1991 tour of Japan, George Harrison spoke of a Traveling Wilburys tour:

That would be something I'd like to experience. I've always played around in my own mind what a Wilburys tour could be. Would each person do a solo set and then do Wilburys at the end, or would we all go right on from beginning to end and make everything Wilburys? It's an intriguing thought. We could have a great band up there and the four of us could play acoustic if we wanted to. We could all sing "Blowin' in the Wind" and Bob could sing "Something". Or we could just sing our individual songs and make them Wilbury tunes, as if we'd recorded them that way. Whatever it was, we could do it.

I think it would work, if we wanted to do it. I don't think we ever considered it, really. There were a lot of nights when the conversation would roll around to that. But I don't think anybody ever took it seriously. I think it would ruin it in a way. Then you're obligated to be responsible and it's not in the character of that group. It would make it very formal and that would be the wrong spirit.

In the late 1990s and early 2000s, the two Traveling Wilburys albums had limited availability and were out of print in most areas. Harrison, as primary holder of the rights, did not reissue them before his death. In June 2007, the two albums were reissued as The Traveling Wilburys Collection, a box set including both albums on CD (with bonus tracks) and a DVD featuring a twenty-four-minute band documentary and a collection of music videos. The box set was released in three editions; the standard edition, with both CDs and DVD in a double Digipak package and a 16-page booklet; a "deluxe" boxed edition with the CDs and DVD and an extensive 40-page booklet, artist postcards, and photographs; or a "deluxe" boxed edition on vinyl. This version omits the DVD, but adds a 12" vinyl disc with rare versions of the songs. The release debuted at number 1 in the UK Albums Chart[9] and the Australian Albums Chart.[10] On the US Billboard 200 it reached number 9. The collection sold 500,000 copies worldwide during the first three weeks and remained in the UK top 5 for seven weeks after its release.

Jim Keltner, the session drummer and percussionist, was not listed as a Wilbury on either album. However, he is seen in all of the group's music videos, and on the DVD released in 2007, he is given the nickname "Buster Sidebury". Overdubs to the bonus tracks "Maxine" and "Like a Ship" also credited as "Ayrton Wilbury", a pseudonym for Dhani Harrison. The name Ayrton was used in honor of F1 racer Ayrton Senna.[11] Jim Horn played saxophone on both albums. The lead guitar on the Volume 3 song "She's My Baby" was played by rock guitarist Gary Moore.[12]

This article uses material from the article Traveling Wilburys from the free encyclopedia Wikipedia and it is licensed under the GNU Free Documentation License.