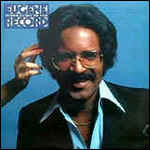 He was born in Chicago.[1] He also released three solo albums (entitled The Eugene Record, Trying to Get to You, and Welcome to My Fantasy) via the Warner Music Group before rejoining the Chi-Lites in 1980. In 1979, he had a disco hit called "Magnetism"'. He also wrote and produced many of the group's hits, such as "Have You Seen Her" and "Oh Girl", frequently in collaboration with other songwriters such as Barbara Acklin. He also wrote and produced for other artists, including Acklin, Jackie Wilson, and The Dells. Record left the Chi-Lites again in 1988 before eventually becoming a gospel singer.

In 1978 he appeared on Saturday Night Live with Michael Palin. He performed "Have You Seen Her" and "Trying to Get to You".

This article uses material from the article Eugene Record from the free encyclopedia Wikipedia and it is licensed under the GNU Free Documentation License.