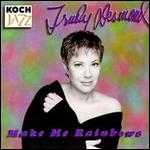 Trudy Desmond (October 11, 1945 – 19 February 1999) was a Canadian jazz singer who moved from New York to Toronto around 1970, and over the following years, while working as an actress, an interior designer, club manager, and theatrical producer, she rose to prominence as one of Canada’s outstanding jazz vocalists.

She performed as a vocalist with both small and large ensembles (she was one of the 16 original members of Doug Riley’s famed Dr. Music ensemble), working in a variety of settings from small clubs to festivals throughout North America,

Desmond began recording on her own in the ‘80s, releasing four albums over the years prior to her death, each on a different label – RSVP (Concord Jazz), Tailor Made (Jazz Alliance), Make Me Rainbows (Koch Jazz), and finally, My One and Only (1998, Justin Time). All four albums are represented in a compilation released by Justin Time in 2005: A Dream Come True: The Best of Trudy Desmond.

Trudy Desmond performed in concert with the Don Thompson Quartet (Ed Bickert on guitar, bassist Paul Novotny, and drummer John Sumner) during the “Sound of Toronto Jazz” Series at the Ontario Science Centre on January 23, 1989.

Trudy Desmond was an original member of the Canadian sixteen piece ensemble Dr. Music, led by Doug Riley. She is listed as one of the singers on the group's first album, Sun Goes By (1972, AGEK-2550).

This article uses material from the article Trudy Desmond from the free encyclopedia Wikipedia and it is licensed under the GNU Free Documentation License.