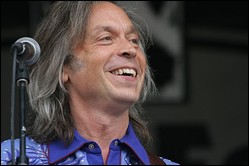 Jim Lauderdale is a musician & singer-songwriter who performs bluegrass and country music. He has recorded since 1986 and has released nineteen studio albums. Artists who have recorded his material include George Strait and Patty Loveless.

Lauderdale was born in Troutman, North Carolina on April 11, 1957. His father, the late W.C. Lauderdale, was a minister and his mother is a retired music teacher now living in Due West, SC. He played drums in high school, and after he graduated, he decided to become a solo performer in New York. He began singing backing vocals for various artists including Carlene Carter and Dwight Yoakam before scoring it big in Nashville after writing hits for George Strait, the Dixie Chicks, Patty Loveless, and more. His solo 1990s recordings have gained him much critical acclaim and a loyal cult following. In 2003, Lauderdale was joined by roots/jam band Donna the Buffalo on the album Wait 'Til Spring.

Jim Lauderdale has hosted the Americana Music Awards for the last seven years, and won their first Artist of the Year and Song of the Year awards in 2002. He was also a judge for the 2nd and 10th annual Independent Music Awards to support independent artists' careers.[1] He is also Honorary Chairperson for the Chris Austin Songwriting Contest each April at MerleFest in Wilkesboro, NC. His 2002 album, Lost in the Lonesome Pines, a collaboration with Ralph Stanley, won the Grammy Award for Best Bluegrass Album that year. His The Bluegrass Diaries won the same award in 2008. In 2007, he began a collaboration with Larry Campbell, the band Olabelle and others in the "American Beauty Project", a loose collection of musicians dedicated to reimagining in performance the Grateful Dead's two classic 1970 albums, Workingman's Dead and American Beauty. His 2009 release "Could We Get Any Closer?" was also nominated for a Grammy at the 52nd Grammy Awards in Jan. of 2010. His current release, "Patchwork River" (his second collaboration with Grateful Dead lyricist, Robert Hunter, the first being "Headed for the Hills") was just released on May 11th, 2010. George Strait's last two singles, "TWANG" and "I Gotta Get to You" (TWANG, MCA) were written by Jim.

He is the current host of "Tennessee Shines," a monthly concert at the Bijou Theater in Knoxville, Tennessee. He also hosts "The Jim Lauderdale Show" Wednesdays at 2 PM (Central Time) on WSM Radio AM 650, and also www.wsmonline.com. Lauderdale is also a frequent host and performer on "Music CIty Roots: Live from the Loveless Cafe", a weekly Americana music show broadcast live on WSM from the Loveless Barn on Highway 100 in Nashville.

This article uses material from the article Jim Lauderdale from the free encyclopedia Wikipedia and it is licensed under the GNU Free Documentation License.