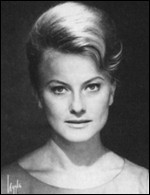 She also interpreted the works of such Swedish singer-songwriters as Evert Taube, Olle Adolphson and Povel Ramel, and all through her life interpreted the works of international and American jazz musicians/songwriters. She worked with some of the greatest international jazz names including Louis Armstrong, Bill Evans, Stan Getz, Steve Kuhn and Quincy Jones, and in the Scandinavian jazz world with people like Georg Riedel, Egil Johansen, Arne Domnérus, Svend Asmussen and Jan Johansson.[1]

In 1964, she recorded the critically acclaimed jazz album Waltz for Debby with Bill Evans, a record she herself described as "the best I've done" and was most proud of. Her long career also included the song "En gång i Stockholm" ("Winter City"); a jazz ballad with which she represented Sweden in the 1963 Eurovision Song Contest. She finished last, however (mainly because the song genre was not suitable for the competition) and scored the infamous nul points, but still managed to remain successful in Sweden. Her collaboration with the comic duo Hasse & Tage (in the 1960s and 1970s) eventually led to a stage career in revues and films. Memorable are her parts in films Att angöra en brygga and Äppelkriget, with her most memorable role being in Jan Troell's Utvandrarna (aka The Emigrants; with Liv Ullmann and Max von Sydow in the leads) as Ulrika, a former prostitute who together with her teenage daughter Elin (portrayed by Zetterlund's daughter, Eva Lena Zetterlund) join the main characters in their emigration to America in the 1850s, a role for which Zetterlund received a Guldbagge Award for Best Supporting Actress.[2] She appeared in more than 20 films and television series throughout her life.[1]

She suffered from severe scoliosis which began after a childhood accident, and as a result was forced to retire from performing in 1999.

She made her last lengthy official tour in 1997, and gave one of her last concerts at Sweden's Hultsfred Festival (which usually is a festival for pop and rock bands; but she participated anyway - and the young rock audience loved her). In the last years of her life she used a wheelchair because of her scoliosis.

On 12 May 2005, she died following an accidental fire in her apartment in Stockholm, probably due to her habit of smoking in bed.[3][4]

This article uses material from the article Monica Zetterlund from the free encyclopedia Wikipedia and it is licensed under the GNU Free Documentation License.