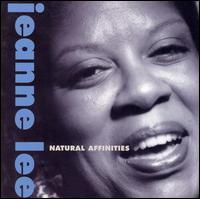 Jeanne Lee was born in New York City. Her father S. Alonzo Lee was a concert and church singer whose work influenced her at an early age. She was educated at the Wolver School (a private school), and subsequently at Bard College, where she studied child psychology,[1] literature and dance. During her time at Bard she created choreography for pieces by various classical and jazz composers, ranging from Johann Sebastian Bach to Arnold Schoenberg. In 1961 she graduated from Bard College with a B.A. degree. That year she performed as a duo at the Apollo Theater's Amateur Night contest with pianist Ran Blake, a fellow Bard alumnus, and after winning made her first record, The Newest Sound Around.[1] The album gained considerable popularity in Europe, where Lee and Blake toured in 1963, but went unnoticed in the US.[2] At this point, Lee's major influence was Abbey Lincoln.[3]

During the mid-1960s Lee was exploring sound poetry, happenings, Fluxus-influenced art, and other multidisciplinary approaches to art. She was briefly married to sound poet David Hazelton, and composed music for the sound poetry by poets such as Dick Higgins and Alison Knowles, becoming active in the California art scene of the time. In the late 1960s she returned to the jazz scene and started performing and recording, quickly establishing herself as one of the most distinctively independent and creative artists in the field. Already a few years after her return she had a major role in Carla Bley's magnum opus, Escalator over the Hill (1971), and recorded albums with eminent musicians including Archie Shepp and Marion Brown. In 1967, while in Europe, Lee began a long association with vibraphonist and composer Gunter Hampel, whom she eventually married. They had a son, Ruomi Lee-Hampel, and a daughter, Cavana Lee-Hampel.

In 1976 she represented the African-American spiritual musical tradition in John Cage's Apartment House 1776, which was composed for the U.S. Bicentennial. The experience inspired Lee to devote more attention to her composing, and create extended works. The immediate result was Prayer for Our Time, a jazz oratorio.

Lee continued to perform and make recordings until her death in 2000, recording for labels such as Birth, BYG Actuel, JCOA, ECM, Black Saint/Soul Note, OWL and Horo. She sang on a large number of albums by Gunter Hampel. In her late years, she ran the Jeanne Lee Ensemble, which performed a fusion of poetry, music and dance, and collaborated and toured with pianist Mal Waldron.

Lee was also active as educator. She received a MA in Education from New York University in 1972 and taught at various institutions both in the US and in Europe. She published a number of short features on music for Amsterdam News and various educational writings, including a textbook on the history of jazz music for grades four through seven.[4]

Lee died from cancer in 2000 in Tijuana, Mexico.[5] She was survived by her husband and children.

This article uses material from the article Jeanne Lee from the free encyclopedia Wikipedia and it is licensed under the GNU Free Documentation License.