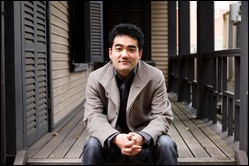 Dai Fujikura was born in 1977 in Osaka, Japan.[1] He moved to London when he was 15 to study at Dover College as a music scholar to complete his secondary education.[2] His initial ambition was to compose music for cinema. Studying the music of Pierre Boulez, György Ligeti and Tru Takemitsu at Trinity College of Music provoked a gestalt shift: Dai became an aspiring contemporary composer, whose extensive knowledge of cinematography gave his music a fresh, individual voice. Imagining sounds as image produced music with considerable dramatic structure and strength. By the end of his second year he had already won the Serocki International Composers Competition. Before graduating, Dai's music had been broadcast on many European radio stations, won several other prizes, and had been performed by a list of illustrious ensembles and soloists including: Orkest de Volharding, the London Sinfonietta, Colin Currie and Harry Sparnaay.

Despite this fortuitous start, and the strength of early works such as Frozen Heat, Cari4nics and Eternal Escape, Dai wanted to develop his technique. A visit to Darmstadt, where he first heard Japanese traditional music, and a Masters with Edwin Roxburgh at the Royal College of Music helped Dai embrace this musical heritage, composing works like Okeanos Breeze for a mix of Japanese and Western Instruments. Whilst at the RCM he was also mentored by Péter Eötvös, writing Fifth Station for the London Sinfonietta.

This period denotes an important phase in the development of Dais music. He experiments with spatial separation, a technique where he breaks up the traditional seating of the orchestra, sometimes placing them around the auditorium for both aural and dramatic effect. The first orchestral work using this technique was Calling Timbuktu (2nd prize Takemitsu Competition 2003) has been performed by the Tokyo Philharmonic and BBC Symphony Orchestras. Also he starts to experiment with video, writing teki and moromoro for solo piano and film. Research into spatial separation, and cinematographic musical structures continued at King's College London under George Benjamin, leading to a PhD.

A portrait concert by the Philharmonia Orchestra (part of the RFH Music of Today series with Martyn Brabbins), retrospectives in New York and Chicago, work with Ensemble Modern, Klangforum Wein, and a subsequent major commission for Vast Ocean at Donaueshingen Music Days with Eotvos launched Dai as a major new voice of the European avant-garde.

Pierre Boulez, with whom he first worked whilst writing Stream State for Orchestra (Premiered at the Lucerne Festival, and receiving five other performances in 2006 alone) has been a major supporter of his work: Dai was one of only two people asked to write a piece for the official Boulez 80th birthday celebrations at Cite de la Musique (Code 80). Subsequent commissions include two pieces for Ensemble Intercontemperain, (one celebrating their 30th birthday), a new work for twelve percussionists for the 2006 Lucerne Festival, a major orchestral and electronic work commissioned by IRCAM and Orchestre Philharmonique de Radio France, and a piano concerto for Noriko Ogawa and the Philharmonia Orchestra.

This article uses material from the article Dai Fujikura from the free encyclopedia Wikipedia and it is licensed under the GNU Free Documentation License.

Luigi Boccherini Rondo quasi Menuetto aus Konzert für Cello und Streicher G-Dur
Update Required To play the media you will need to either update your browser to a recent version or update your Flash plugin.