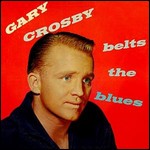 Gary Evan Crosby (June 27, 1933 – August 24, 1995) was an American singer and actor. He wrote a "kiss and tell" memoir of his father, Bing Crosby. His mother was singer/actress Dixie Lee, Bing Crosby's first wife.

Gary Crosby was born in Los Angeles, California. He attended Stanford University but dropped out, then fell into following in his father's footsteps in the entertainment business. He performed in a harmony singing group, The Crosby Boys, with his three brothers, Philip, Lindsay, and Dennis, during the 1940s, 1950s, and 1960s. Crosby performed on several variety programs, including ABC's The Pat Boone Chevy Showroom and NBC's The Ford Show, Starring Tennessee Ernie Ford.

As an actor, Crosby was briefly under contract to 20th Century-Fox but is perhaps best-remembered for his recurring roles as Eddie the scheming bellhop on The Bill Dana Show and Officer Edward "Ed" Wells on NBC's Adam-12 from 1968 to 1975, as well as appearances on several other shows produced by Jack Webb's Mark VII Limited (including an episode of Dragnet 1969 and two episodes of Emergency!). In 1965 Crosby made a guest appearance on Perry Mason as singer Jazbo Williams in "The Case of the Frustrated Folk Singer." He also appeared in the film Girl Happy (1965), with Elvis Presley, and "Come Wander With Me," an episode of The Twilight Zone in 1964.

Later in the 1970s, Crosby appeared occasionally on such game shows as Match Game and Tattletales as a guest panelist.

In 1983, six years after Bing's death, Crosby published his autobiography, Going My Own Way, which revealed the effect of his alcoholism and his difficult childhood as a result of his mother's alcoholism and his father's alleged emotional and physical abuse. Some, especially his brother Philip, claimed the abuse was not as severe as Gary described. However, Lindsay and Dennis reportedly confirmed Gary's account; both later committed suicide by gunshot. The book destroyed Bing Crosby's image as an ideal, low-keyed father, an image helped in no small measure by Crosby's famous holiday TV specials that usually included family members from his second marriage.

Gary Crosby died of lung cancer in Burbank, California, in 1995, and was interred in the Forest Lawn - Hollywood Hills Cemetery in Los Angeles. His mother, Dixie Lee, had previously died of ovarian cancer.

This article uses material from the article Gary Crosby (actor) from the free encyclopedia Wikipedia and it is licensed under the GNU Free Documentation License.