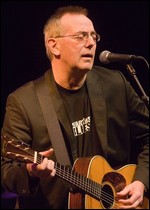 Gary Fletcher is a British blues musician, best known for playing bass guitar with The Blues Band, he is also a guitarist and songwriter.

Born in London in the early 50's, he became interested in blues music in the late 60's, so he learnt to play his sister's acoustic guitar. Being left-handed, he turned the guitar over, without reversing the strings, so he learnt and continues to play "upside-down". [1]

After his first band, The Breath of Life, he played in Streatham folk-rock band Garfield Row, who were helped by Glenn Cornick. After playing in several blues, folk-rock and country bands, he ended up playing and writing for rock band Panama Scandal. He joined blues band Sam Apple Pie in the mid 70's, after they had already recorded both their albums, and shortly before they became The Vipers.

Fletcher and his friend Steve Gurl, who had played with Cornick in Wild Turkey, won a recording contract, whilst Fletcher, Gurl and Fletcher's wife Hilary, also won a publishing contract. [2]

In 1978 Fletcher joined The Wildcats led by Wilgar Campbell (Rory Gallagher's ex drummer), where he met Dave Kelly. Kelly invited him to play bass on his album Willing, and suggested Fletcher as bassist when Kelly, Paul Jones, Tom McGuinness and Hughie Flint formed The Blues Band in 1979. Fletcher has remained with The Blues Band from its inception.

Fletcher has written several numbers for the Blues Band, notably "Green Stuff" from the 1980 album Ready, which is still a common encore, and "Stepping Out On Main" from the album Stepping Out

As well as The Blues Band, Fletcher has also undertaken side projects, writing and recording with other musicians, including The Dave Kelly Band and Christine Collister, Dave Kelly & The Travelling Gentlemen. [1]

He formed The Relatives, with his wife Hilary, who released the Feud of Love album on Arone Records in 1997. The Relatives also played live, supplemented by Hilary's sister Vivien on vocals and Fletcher's son Jack on drums. [3]

His son Jack was hospitalised after a major accident, and played music to help his recovery. Gary joined him to perform for the patients, and once Jack was released, they played at local parties and pubs as The Fletchers. Both of them sing, and play guitar and bass, but The Fletchers appearances are limited by Gary's commitment to The Blues Band and The Gary Fletcher Band, and Jack's appearances as drummer for Aphid.

Outside of music Fletcher is a keen racing driver, although he only took this up in his mid 40's. Initially competing in the '95/'96 Ford Credit Fiesta Challenge, his first win came in July '98 at Castle Combe in the Proton Coupe Cup and he came third overall in the '99 Championship. As music commitments limit the number of races he can compete in, he became a racing instructor.[5]

With Christine Collister, Dave Kelly and the Travelling Gentlemen

With The British Blues All Stars

With The Blues Band

This article uses material from the article Gary Fletcher (musician) from the free encyclopedia Wikipedia and it is licensed under the GNU Free Documentation License.