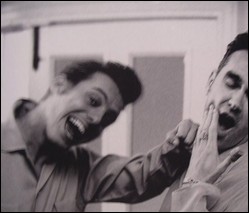 Alain Gordon Whyte (pronounced Alan) (born 3 July 1967) is an English guitarist, singer, and songwriter. He is most known for being Morrissey's[1] main songwriting partner since 1991 and his lead guitarist from 1991-2004. More recently, he has written for the likes of Madonna, Chris Brown, Rihanna, The Black Eyed Peas among many others. He won an ASCAP pop award in 2013 for his work as a songwriter on Chris Brown's hit single "Don't Wake Me Up".[2]

Whyte joined Morrissey's band in 1991 after appearing in the music video for his single "Sing Your Life". While playing on the Kill Uncle tour in 1991, Whyte co-wrote eight of the ten songs on the album Your Arsenal which was subsequently released in 1992. Whyte played lead guitar live with Morrissey from 1991 to 2004 until he was taken ill and replaced by Jesse Tobias. Whyte never returned to the touring act.

Songwriting credits with other artists

As of Years of Refusal, Whyte has 81 known songwriting credits with Morrissey. Whyte's credits include:

Ringleader of the Tormentors (2006)

Of Morrissey's 40 currently released singles, Whyte has written 16. However, Whyte did not join Morrissey's band until 1991. Since 1991, Morrissey has released 29 singles giving Whyte the credit of writing over half of Morrissey's singles since that time.

Johnny Panic And The Bible Of Dreams

Johnny Panic And The Bible Of Dreams

This article uses material from the article Alain Whyte from the free encyclopedia Wikipedia and it is licensed under the GNU Free Documentation License.