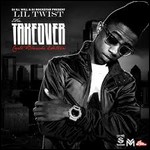 Christopher Moore (born January 11, 1993), known by his stage name Lil Twist, is a rapper from Oak Cliff, Dallas, Texas, United States.[1] He is currently signed to Young Money Entertainment.[2] Lil Twist alongside his younger brother Lil Za, another aspiring rapper artist, is best known for his association with Justin Bieber.[3][4][5][6][7]

Lil Twist is from Dallas, Texas. He dropped out of high school after completing one year.[3]

When he was 12 years old, Lil Twist went to a Lil Wayne concert in Tyler, Texas and opened for Lil Wayne. Impressed, Cortez and Wayne flew Lil Twist to Atlanta to see how he was in a recording studio.[8]

He released his first single, "The Texas Twist", when he was 10 years old, which was #1 locally in Dallas for 6 straight weeks.[9]

Lil Twist was signed to Young Money Records after Lil Wayne saw him perform at one of his concert openings in 2007.

He released mixtapes such as The Golden Child, and a single, "Love Affair" to build anticipation for his upcoming album, Bad Decisions.

He was featured in XXL hip hop magazine's "2011 Freshman Class". Since then, he has been featured as a guest artist on recordings by Bieber in "Twerk", "Wind It" and others, 2 Chainz in "Do What I Want" and with Miley Cyrus. His 2012 mixtape 3 Weeks in Miami is a collaboration with Khalil.[10]

Lil Twist has made guest appearances on Disney Channel's animated series Fish Hooks as the voice of Brandon Bubbler.

Lil Twist's younger brother Xavier Dominique Smith, is an aspiring rapper known by the stage name Lil Za On July 11, 2013, Lil Twist was arrested for DUI in Calabasas, California. He was driving Justin Bieber's Fisker Karma and was alleged to be going between 60 and 70 mph in a 30 mph zone.[11]

This article uses material from the article Lil Twist from the free encyclopedia Wikipedia and it is licensed under the GNU Free Documentation License.