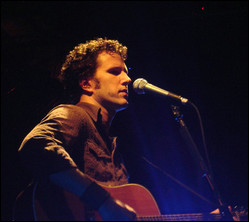 Mason Jennings (born March 19, 1975 in Honolulu, Hawaii) is an American pop-folk singer-songwriter. He is well known for his simple yet catchy melodies, intimate lyrics, literary and historical themes, and distinctive voice. His music has appeared in the surf film Shelter and he has toured extensively.

Born in Hawaii, Jennings moved with his family to Pittsburgh, Pennsylvania, at an early age. Jennings learned to play guitar at the age of 13, when he began writing songs. Jennings later dropped out of school and moved to Minneapolis, Minnesota to pursue his musical career.[1]

Jennings produced his self-titled debut album in 1997 on an analog four-track in the living room of a rented home, playing all instruments himself. In October 1998, joined by drummer Chris Stock (a.k.a. Chris Stocksmith) and bassist Robert Skoro, he began a weekly gig at Minneapolis' 400 Bar as the Mason Jennings Band. The two week gig ended up lasting four months. In April 1999, six months after forming, The Mason Jennings Band and Mason were voted by the 1999 "Picked to Click Poll" conducted by Minneapolis newspaper, City Pages. Mason began touring nationally and expanded the depth of his sound by inviting saxophonist Chris Thomson to play with them occasionally and replacing Stock with Brazilian jazz drummer Edgar Olivera.

Birds Flying Away (2000) revealed Jennings' political activism and penchant for singing first-person narratives of imaginary rustic characters. Following the release of this album, Noah Levy of The Honeydogs took over drumming duties from Olivera.

In 2002, Jennings released a studio album, Century Spring, and a "fans only" collection of acoustic songs, Simple Life. An EP supporting Century Spring was also released, featuring the album's opening track, "Living In The Moment," two live tracks, and the previously-unreleased "Emperor Ashoka." Jennings released all three discs and re-released his earlier albums on his homebrew record label, Architect Records.

In 2003, Skoro and Levy left the band and were replaced by bassist Chris Morrissey (Bill Mike Band) and drummer Brian McLeod.

On February 10, 2004, Jennings released Use Your Voice, which notably included the songs "Keepin' It Real," ostensibly written at the request of Shrek 2 producers (but not used in the film), and "The Ballad of Paul and Sheila," an acoustic dirge for late Minnesota senator Paul Wellstone. On September 30 of that year, the band released a DVD entitled Use Your Van, which chronicled the recording of Use Your Voice and part of the promotional tour. The DVD was filmed by Andy Grund.

Mason sang two Bob Dylan songs for the soundtrack of the movie "I'm Not There" (released in November 2007 in the U.S.): "The Times They Are a-Changin'" and "The Lonesome Death of Hattie Carroll."

In early 2008 Mason signed with Jack Johnson's record label, Brushfire Records. Jennings released In the Ever in May 2008. The title was inspired by his son referring to where he was before he was born as, "In the ever". Mason and Johnson met at Gustavus Adolphus College's Earth Jam in 2001 when Mason was scheduled as Johnson's opening act. Both enjoyed the other's musical style and toured together shortly afterward.

Mason announced at the Elemental Experience Music & Arts Festival in San Diego on May 2, 2009, that he would be releasing a new album (later entitled Blood of Man) in summer 2009. He also mentioned that he would have music on the soundtrack for the documentary "180° South". The documentary was released in March 2010.

On June 2, 2009 the single "Sunlight" was released on iTunes and all proceeds will go to the Surfrider Foundation in efforts to help clean up beaches around the country.

On June 20, 2009, Mason Jennings headlined the Locally Grown Festival in Ojai, California. Jack Johnson sat in for a portion of the set, singing both Mason and Jack's songs. Zach Gill performed as well, as the show ended with "I Shall Be Released", a song written by Bob Dylan.

On September 15, 2009, Blood of Man was released on CD and vinyl format. A free bonus EP titled Independent (containing the tracks "Mark My Heart With Ashes" and "Wide Open Country") was distributed with the album at independent record stores. A week before the official CD release, a version of the album containing the exclusive track "Waves" was made available exclusively on iTunes.

In late 2010, Live at First Ave. his first live album ever was released. Mason Jennings is the subject of the second episode of BYUtv's AUDIO-FILES on April 24, 2012.

In 2010, Mason released "The Flood". This album was made up of songs he had recorded in the 90s on a cassette tape. Based on recommendation from a friend, Mason rediscovered these songs and re-recorded them in a stripped down fashion to stay true to their intent.

On 11/12/13 (he claims that was unintentional), he released "Always Been". The first single from the album was "Lonely Street", followed by "Wilderness".

This article uses material from the article Mason Jennings from the free encyclopedia Wikipedia and it is licensed under the GNU Free Documentation License.