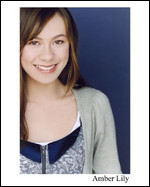 Amber Lily Solberg (born on January 18, 1997), better known as simply Amber Lily, is an American singer, actress, and dancer from San Francisco, California.[1] She was featured on Radio Disney's "Next Big Thing", or "N.B.T.".[2]

Amber Lily Solberg was born on January 18, 1997 near Los Angeles, California, to parents Eric Solberg and Maria Elena Baduria. She is half Norwegian and half Filipino. Solberg began singing at the age of 5, where she sang Christina Aguilera's song "Reflection" at her school's first grade talent show. Later on, at age 7, she starred in her first musical theater production. On August 8, 2008, she released her first full-length album, Amber Lily, which contained 9 original songs, each co-written by Solberg and Simone Sello, who produced the entire album.[1]

Amber Lily was a featured artist on Disney's "Next Big Thing", or "N.B.T", alongside 4 other acts, which were announced late 2009.[2] Two original singles were featured on the show: "2 2 2 L8" and "Next To You." They were later featured on her second album, Coming to Life. Amber Lily did not win the competition, but has been featured on Radio Disney's channel, the same thing happens with Coco Jones and "N.B.T." winners, Kicking Daisies.

Amber Lily was signed to Island Def Jam Digital Distribution in late 2010 or early 2011. With them she recorded her second album Coming to Life, which was released on June 7, 2011.[3] The album contains 13 original tracks, including the two singles from Radio Disney's "Next Big Thing": 2 2 2 L8 and Next To You.

On August 7, 2011, she released a single, entitled Overloadin', which was written by herself and Ben Charles.[4] A music video was released on October 20, 2011, and was directed by DJ Cosgrove. The video includes cameos from So Random! stars Allisyn Ashley Arm and Audrey Whitby. The song has also been featured on Radio Disney. On March 3, 2012 Amber Lily debuted another new song, Don't Know What To Do.[5] The music video was released on February 24, 2012. The song is currently playing on Radio Disney. She is also currently working on a second EP.

In 2012, she auditioned in San Francisco, CA for the second season of The X Factor, singing Starships by Nicki Minaj. All four judges said yes. She made it through to the Bootcamp round, but was eliminated in the last round of it.

This article uses material from the article Amber Lily from the free encyclopedia Wikipedia and it is licensed under the GNU Free Documentation License.

Richard Wagner Vorspiel zur Oper "Die Meistersinger von Nürnberg"
Update Required To play the media you will need to either update your browser to a recent version or update your Flash plugin.