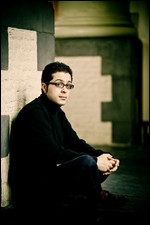 Mahan Esfahani (Persian: ) is an Iranian-American harpsichordist; he is the first harpsichordist named as a BBC Radio 3 New Generation Artist. As a concerto soloist and recitalist, he has gained an international reputation.[1]

Born in 1984 in Tehran, Esfahani grew up in United States. While at Stanford University, Esfahani studied musicology, took harpsichord lessons with Elaine Thornburgh, and came most seriously under the influence of the American scholar George Houle.[2] Later, he continued his harpsichord studies with the Australian harpsichordist Peter Watchorn in Boston and with the Italian organist Lorenzo Ghielmi in Milan,[1] and completed his studies with the Czech harpsichordist Zuzana Riková. Unlike the mainstream of harpsichordists concertising today he has largely diverged from the school of Gustav Leonhardt, though he does cite him as an important spiritual influence.[3]

Having quickly gained an international reputation without the benefit of going through the customary competitions, played many significant concerts,[4] [5] [6] he has been praised as "exceptionally gifted" (The Times) and for "the virtuosity of a master" (Keyboard Magazine).,[1] he was the Artist-in-Residence at New College, Oxford from 2008 to 2010. He made his Wigmore Hall debut in 2009 as a concerto soloist with The English Concert, and in the same year performed at the BBC Proms' chamber series and made extensive recordings of concerto and solo repertoire for the harpsichord for BBC Radio 3. Further afield, he made his New York debut at the Frick Collection in 2012,[7] and a solo tour of Japan in 2013.

From 2008-2010 Mahan Esfahani was a BBC Radio 3 New Generation Artist. Currently he is the first and only early instrument specialist to have joined the programme.

Respected for gaining attention for the harpsichord as a concert instrument, Mahan Esfahani is known for his criticism of what he perceives as the many dogmas of the early music movement, preferring to use many of his own editions and conclusions gained from the close reading of period sources, and works actively with modern instrument players in re-creating the sonic world of earlier music.

Esfahani is managed by Rayfield Allied of London.[8] He was the recipient of a Borletti Buitoni Trust Award in 2009, being the first harpsichordist and first Iranian to do so. He has continued his work in bringing the harpsichord to the mainstream of Classical Music, and in 2011 made history with the first solo harpsichord recital at the BBC Proms.[9]

He also started to make a name as a conductor and director, appearing with such ensembles as The Academy of Ancient Music, The Manchester Camerata, The Hanover Band, The English Concert, and Arion Baroque Orchestra of Montreal. His recording of Carl Philipp Emanuel Bach's Wurttemberg Sonatas (1744) was released in 2014 for Hyperion Records; the same label will be releasing his two-disc set of the complete harpsichord works of Jean-Philippe Rameau.

2012 saw a major project in orchestrating and arranging J.S. Bach's Art of Fugue for the Academy of Ancient Music; this work received its world premiere performance in the BBC Proms.

He makes his home in London.

This article uses material from the article Mahan Esfahani from the free encyclopedia Wikipedia and it is licensed under the GNU Free Documentation License.