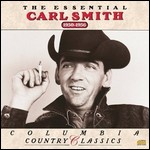 Carl Milton Smith (March 15, 1927 – January 16, 2010) was an American country music singer.[1][2][3] Known as "Mister Country," Smith was the husband of June Carter (later June Carter Cash) and Goldie Hill, and the father of Carlene Carter. He was one of country's most successful male artists during the 1950s, with 30 Top 10 Billboard hits, including 21 in a row. Smith's success continued well into the 1970s, when he had a charting single every year except one. He is a member of the Country Music Hall of Fame.

A native of Maynardville, Tennessee, Carl Smith aspired to a musical career after hearing the Grand Ole Opry on the radio. He sold seed to pay for guitar lessons as a teenager.[4][5] At age 15, he started performing in a band called Kitty Dibble and Her Dude Ranch Ranglers. By age 17, he had learned to play the string bass and spent his summer vacation working at WROL-AM in Knoxville, Tennessee, where he performed on Cas Walker's radio show.[6]

After graduating from high school, he served in the U.S. Navy from 1944–47. He returned to WROL and played string bass for country singers Molly O'Day and Skeets Williamson, and began his singing career. A colleague at the station sent an acetate disc recording of Smith to WSM-AM and the Grand Ole Opry in Nashville, Tennessee, and WSM soon signed him. In 1950, Smith was signed to a recording contract with Columbia Records by producer Don Law.[6]

In 1951, his song "Let's Live a Little" was a big hit, reaching No. 2 on country chart. During 1951 he had up three other hits, including "If the Teardrops Were Pennies" and his first No. 1 hit, "Let Old Mother Nature Have Her Way".[6] The songs made Smith a well-known name in country music. His band, the Tunesmiths, featured steel guitarist Johnny Silbert, who added an element of Western swing.[5]

In 1952, Smith married June Carter (who later became the wife of Johnny Cash), the daughter of Maybelle Carter of the Carter Family. In 1955 the couple had a daughter, Rebecca Carlene Smith, who later became known as Carlene Carter, a country singer in her own right.[6]

During the rest of the 1950s, Smith made regular appearances on Billboard's country charts, racking up many hits, including 30 in the Top 10. His biggest hits include "Loose Talk", "Wicked Lies", "Hey Joe!" and "You Are the One". He had five No. 1 hits in his career; "Loose Talk" was his last, in 1955.

Some of his songs had sharp edges, fast phrasing and a strong drumbeat, similar to rockabilly material making the charts in the mid-50s, which in some ways made Smith's music closer to rock and roll than country. Some of his songs did, however, make the pop charts. His biggest pop entry was the song "Ten Thousand Drums" in 1959, which reached No. 43 on the pop chart.

In 1956, Smith quit the Grand Ole Opry. Soon after, he joined The Phillip Morris Country Music Show and spent more than a year touring the United States, often in direct competition with touring Opry shows. He also made regular appearances on ABC-TV's Jubilee USA and was a fill-in host for Red Foley.

In 1957, Smith and June Carter divorced. That same year, he appeared in the movie, The Badge of Marshal Brennan and Buffalo Guns, and married country music singer Goldie Hill, best known for the No. 1 hit "I Let the Stars Get In My Eyes". Goldie retired from the music business. By the late 50s, Smith's success began to dwindle on the country charts, and soon his string of Top 10s turned into Top 20 hits.

By the 1960s, Smith's success as a country singer began to slow. His Top 20 hits included "Air Mail To Heaven" in 1962 and "Take My Ring Off Your Finger" in 1964. His biggest hit of the decade was "Deep Water" in 1967, which peaked at No. 10 and became his first top 10 in eight years (and his final top 10 appearance). In 1961, he was one of five rotating hosts on the NBC television series Five Star Jubilee. He also hosted Carl Smith's Country Music Hall in Canada, a series syndicated in the United States. Smith appeared on The Jimmy Dean Show on April 9, 1964.

In the 1960s and 1970s, Smith incorporated more Western swing into much of his recorded material. He remained with Columbia Records for almost 25 years, leaving in 1975 to sign with Hickory Records. By this time his singles were barely making the charts. He appeared in the Hawaii Five-O episode, "Man on Fire", first aired on October 21, 1976.

Thanks to his real estate and song publishing investments, he decided to retire from the music business in the late 1970s to concentrate on his second passion, raising horses for cutting,[5] but in 1983, he recorded an album for the Gusto label. In 2003, he was inducted into the Country Music Hall of Fame.

His wife Goldie died in 2005. Smith, who lived on a 500 acres (Expression error: Missing operand for * ) horse farm in Franklin, south of Nashville, followed her in January 2010. The cause of death was natural causes. He was survived by two sons, Carl, Jr. and Larry Dean; and two daughters, Carlene and Lori Lynn.[5]

This article uses material from the article Carl Smith (country musician) from the free encyclopedia Wikipedia and it is licensed under the GNU Free Documentation License.