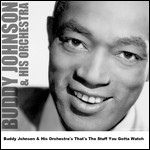 Not to be confused with Budd Johnson.

Buddy Johnson (January 10, 1915 February 9, 1977)[1] was an American jazz and New York blues pianist and bandleader, active from the 1930s through the 1960s. His songs were often performed by his sister Ella Johnson, most notably "Since I Fell for You" which later became a jazz standard.

Born Woodrow Wilson Johnson in Darlington, South Carolina,[1] Johnson took piano lessons as a child, and classical music remained one of his passions.[2] In 1938 he moved to New York,[3] and the following year toured Europe with the Cotton Club Revue, being expelled from Nazi Germany. Later in 1939 he first recorded for Decca Records with his band, soon afterwards being joined by his sister Ella as vocalist.

In 1946 Johnson composed a Blues Concerto, which he performed at Carnegie Hall in 1948. His orchestra remained a major touring attraction through the late 1940s and early 1950s, and continued to record in the jump blues style with some success on record on the Mercury label like "Hittin' on Me" and "I'm Just Your Fool".[2] His song Bring It Home To Me appears on the 1996 Rocket Sixty-Nine release Jump Shot!.

"Personally, I like classics," Buddy Johnson told Down Beat magazine, "but our bread and butter is in the South. The music I play has a Southern tinge to it. They understand it down there."[3]

This article uses material from the article Buddy Johnson from the free encyclopedia Wikipedia and it is licensed under the GNU Free Documentation License.