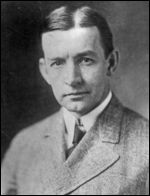 Charles Gates Dawes (August 27, 1865 – April 23, 1951) was an American banker and politician who was the 30th Vice President of the United States. For his work on the Dawes Plan for World War I reparations he was a co-recipient of the Nobel Peace Prize. He served in the First World War, was U.S. Comptroller of the Currency, the first director of the Bureau of the Budget, and, in later life, the U.S. Ambassador to the United Kingdom.

Dawes was born in Marietta, Washington County, Ohio to Civil War soldier Rufus R. Dawes and Mary Beman Gates. He graduated from Marietta College in 1884, and from the Cincinnati Law School in 1886. While attending Marietta College he joined The Delta Upsilon Fraternity. He was admitted to the bar and practiced in Lincoln, Nebraska, between 1887 and 1894. When Lt. John Pershing, the future Army general, was appointed military instructor at the University of Nebraska while attending the law school, he and Dawes became acquainted, forming a lifelong friendship.

Dawes' lineage made him the great-great-grandson of the Revolutionary War figure William Dawes and the son of Brigadier General Rufus Dawes, who commanded the 6th Wisconsin regiment of the Iron Brigade from 1863-1864 during the American Civil War. His brothers were Rufus C. Dawes, Beman Gates Dawes, and Henry May Dawes, all prominent businessmen or politicians. He also had two sisters, Mary B. Dawes and Betsy D. Dawes.

In 1894, Dawes acquired interests in a number of midwestern gas plants and became president of both the Lacrosse Gas Light Company in LaCrosse, Wisconsin and the Northwestern Gas Light and Coke Company in Evanston, Illinois.

Dawes was a self-taught pianist and composer and a member of Phi Mu Alpha Sinfonia, the national fraternity for men in music. His 1912 composition, "Melody in A Major," became a well-known piano and violin piece, and was played at many official functions as his signature tune. It was transformed into the pop song, "It's All In The Game," in 1951 when Carl Sigman added lyrics. Tommy Edwards' recording of "It's All in the Game" was a number one hit on the American Billboard record chart for six weeks in the fall of 1958.[1] Edwards' version of the song also hit number one on the UK chart that year.[2] Since then, it has since become a pop standard recorded hundreds of times by artists including The Four Tops, Van Morrison, Cliff Richard, Nat "King" Cole, Brook Benton, Elton John, Mel Carter, Barry Manilow, and Keith Jarrett.

Those prominent positions caught the attention of Republican party leaders, who put Dawes in charge of managing the Illinois portion of William McKinley's bid for the Presidency of the United States in 1896. Following McKinley's election, Dawes was rewarded for his efforts by being named Comptroller of the Currency, United States Department of the Treasury. Serving in that position from 1898-1901, he collected more than $25 million from banks that had failed during the Panic of 1893, and also changed banking practices to try to prevent a similar event in the future.

In October 1901, Dawes left the Department of the Treasury in order to pursue a U.S. Senate seat from the State of Illinois. Dawes believed that with the help of the McKinley Administration, he could win the Senate seat, however after McKinley's assassination, Dawes's hopes of winning faded because President Theodore Roosevelt preferred Dawes's opponent.[3] In 1902, following this unsuccessful attempt at legislative office, Dawes declared that he was done with politics. He organized the Central Trust Company of Illinois, serving as president of the company until 1921.

On September 5, 1912, Dawes' son, Rufus (21), drowned in Geneva Lake while on summer break from Princeton University. Reverend W.T. McElveen read Dawes's tribute to his son. Inspired by his son's charity, Dawes writes, "I have taken him with me among the greatest in the nation and looked in vain for any evidence in him of awe or even curiosity. He has taken me, asking me to help them among the poor and lowly of earth." In his memory, Dawes created residence homes for down-and-out individuals in both Chicago and Boston. Dawes's biological daughter, Carolyn, later married Melvin Burton Ericson, and his adopted daughter, Virginia, married Richard Thompson Cragg in 1936.

During the First World War, Dawes was commissioned Major, Lieutenant Colonel, and Brigadier General of the Seventeenth Engineers. He served with the American Expeditionary Force as chief of supply procurement and was a member of the Liquidation Commission, United States War Department. After the war, the U.S. Senate held hearings on overcharges by military suppliers, and during heated testimony, Dawes burst out, "Hell and Maria, we weren't trying to keep a set of books over there, we were trying to win a war!" He was later known as "Hell and Maria Dawes" (although he always insisted the expression was "Helen Maria").

After his resignation from the Army in 1919, and upon the creation of the Bureau of the Budget, he was appointed its first Director in 1921. He was appointed to the Allied Reparations Commission in 1923. For his work on the Dawes Plan, a program to enable Germany to restore and stabilize its economy, Dawes shared the Nobel Peace Prize in 1925. Unfortunately, the Dawes Plan was unworkable and was replaced with the Young Plan.

I should hate to think that the Senate was as tired of me at the beginning of my service as I am of the Senate at the end. Charles G. Dawes[4]

At the 1924 Republican National Convention, Calvin Coolidge was quickly selected almost without opposition to be the Republican Presidential Nominee.[5] The Vice Presidential Nominee, on the other hand, was more contested. At first Illinois Governor Frank Lowden was nominated for the Vice Presidency, but he declined the nomination. Coolidge's next choice was Idaho Senator William Borah, but he also declined the nomination. The Republican National Chairman, William Butler, pledged to nominate then Commerce Secretary Herbert Hoover, but he proved to be too unpopular to garner the nod.[5] Eventually, the delegates chose Dawes to be the Vice Presidential Nominee. Though Coolidge had already sent a congratulatory statement to Lowden, Coolidge quickly accepted the delegates' choice and felt that Dawes would be loyal to him and make a strong addition to his campaign.[5]

Dawes was elected Vice President of the United States on November 5, 1924 with more popular votes than the candidates from the Democratic and Progressive parties combined.[6] Dawes and Coolidge were inaugurated on March 4, 1925.

As Vice President, Dawes feuded bitterly with President Coolidge. Soon after his election he sent an insulting letter to President Coolidge informing him that he would not be attending cabinet meetings. This is believed to be the beginning of a feud between the two which brought the reputation of the Vice Presidency to its nadir for the 20th century.

This speech overshadowed Coolidge's, something that made the President even more angry with Dawes.

Dawes' Vice Presidency reached a low point on March 10, only days after Dawes started presiding over the Senate, as the president's nomination of Charles B. Warren to be attorney general was being debated. In the wake of the Teapot Dome scandal and other business-related scandals, Democrats and Progressive Republicans objected to the nomination because of Warren's close association with the Sugar Trust. At midday six speakers were scheduled to address Warren's nomination. Desiring to return to his room at the Willard Hotel for a nap, Dawes consulted the majority and minority leaders, who assured him that no vote would be taken that afternoon. After Dawes left the Senate, however, all but one of the scheduled speakers decided against making formal remarks, and a vote was taken. When it became apparent that the vote would be tied, Republican leaders hastily called Dawes at the Willard. The roused vice president jumped in a taxi and sped toward the Capitol. But enough time intervened to persuade the only Democratic senator who had voted for Warren to switch his vote against him. By the time Dawes arrived there was no longer a tie to break, and the nomination had failed by a single votethe first such rejection in nearly sixty years.[4]

This incident was chronicled in a derisive poem, based on the Longfellow poem "Paul Revere's Ride" which began with the line, "Come gather round children and hold your applause for the afternoon ride of Charlie Dawes." The choice of poem was based on Charles Dawes being descended from William Dawes who rode with Paul Revere.

In 1928 the Republican nomination went to Commerce Secretary Herbert Hoover, whose supporters considered putting Dawes on their ticket as vice president. But President Coolidge let it be known that he would consider Dawes' nomination to be a personal affront. Instead the nod went to Senate Majority Leader Charles Curtis of Kansas.

The Court of St. James's and the RFC

After Dawes had finished his term as Vice President, he served as the U.S. Ambassador to the United Kingdom (i.e., to the Court of St. James's) from 1929 to 1932. However, Dawes found some of his duties as Ambassador, such as presenting American débutantes to King George V, to be insulting. He further alienated his hosts by refusing (in deference to American public opinion) to wear the customary Court dress, including knee breeches, on his first visit to the royal court. While Dawes himself gave scant importance to this episode, it upset King George even though illness had prevented the King from personal attendance. Barring this one incident Dawes was a very effective U.S. ambassador, as George's son, the future King Edward VIII, would later confirm in his memoirs.

As the Great Depression continued to ravage the United States, Dawes accepted President Herbert Hoover's urgent appeal to leave diplomatic office and head the newly-created Reconstruction Finance Corporation. However, Dawes resigned from the RFC after a few months because he felt obliged, as one of its board members, to attempt a rescue of the failing City National Bank and Trust Company of Chicago. (Political opponents also alleged that, under his leadership, the RFC had given Dawes' bank preferential treatment.) This marked the end of Dawes' career in public service.

Dawes resumed a role in the banking business, becoming chairman of the board of the City National Bank and Trust Co. from 1932 until his death in Evanston in 1951. He is interred in Rosehill Cemetery, Chicago. His landmark lakeshore home in Evanston is owned by Northwestern University and operated by the Evanston History Center as a museum.

The list below was retrieved from Haberman's 1972 Nobel Lectures, Peace 1901-1925. This list can also be obtained here.

This article uses material from the article Charles G. Dawes from the free encyclopedia Wikipedia and it is licensed under the GNU Free Documentation License.