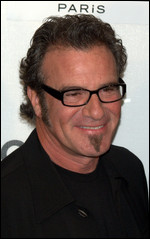 Hector Juan Samuel "Tico" Torres (born October 7, 1953) is an American musician, artist, and entrepreneur, best known as the drummer, percussionist, and a songwriter for American rock band Bon Jovi. He also has taken lead vocals on a song on the box set 100,000,000 Bon Jovi Fans Can't Be Wrong, as well as backing vocals on a couple of the early Bon Jovi tracks, notably "Born to Be My Baby" and "Love for Sale".

Hector Juan Samuel Torres was born on October 7, 1953, in New York, and brought up in the Colonia section of Woodbridge Township, New Jersey. His parents, Emma and Héctor, immigrated from Cuba in 1948.[1] Torres attended John F. Kennedy Memorial High School in Iselin.[2] He has a sister called Opi.

Torres was a jazz fan as a youth and studied music with Joe Morello. In 1969, he played drums for the psychedelic rock band Six Feet Under. Before joining Bon Jovi in 1983, Torres had already played live with Joe Cerisano's R-Band aka Silver Condor in the New Jersey Rock circuit, and in the studio with Franke and the Knockouts, Pat Benatar, Chuck Berry, Cher, Alice Cooper and Stevie Nicks, recording a total of 26 albums with these artists. Torres was also one of the drummers auditioned by Kiss in 1980 after original drummer Peter Criss left the band.

Torres was the original drummer for the glam rock band T. Roth and Another Pretty Face and played on their 1980 album Face Facts.[3]

Torres met Alec John Such while playing with a band called Phantom's Opera and it was this friendship which led to him joining Bon Jovi. When Jon Bon Jovi, the lead singer of the band, approached Torres, he was put off by the fact that Jon was 9 years younger than he was. Regardless of this he said it was Jon's charismatic appearance and watching Jon perform that attracted him to join the band.

After a long endorsement deal with Pearl drums and hardware since 1984, after Richie Sambora's last show with Bon Jovi in April 2013, Torres changed from Pearl drums to DW, after DW made a custom kit out of cherry wood to Torres' specifications.[4] Along with DW, Torres also endorses Paiste cymbals, Remo drumheads, his signature Easton Ahead drumsticks/griptape/gloves, LP percussion and Beato drum bags. Torres used DW pedals for most of his career but not hardware until 2013.

Known as "The Hitman," Torres discovered another talent: painting. He has exhibited his art since 1994. The successful first show was at the Ambassador Galleries in Soho, New York. Torres is a self-taught painter, who paints expressive pictures which show scenes from everyday life and his life with the band.

His painting talent was shown in one of the three videos made for the single "Who Says You Can't Go Home." There is a scene in one of the videos showing Jon Bon Jovi, Richie Sambora, and David Bryan painting a wall of a house a solid color, while Tico is at the other end of the room, painting an extravagant picture of a house surrounded by a multi-colored heart on the same wall. His art can be found at http://www.walnutst.com/.

Torres and his first wife divorced soon after the formation of Bon Jovi in 1983. In 1996, Torres married Czech-born model Eva Herzigová in Sea Bright, New Jersey. The ceremony was attended by their closest friends and family including Donald Trump and the members of Bon Jovi. The band serenaded Eva and her husband with the hit single "Always" during the dance. Their marriage ended two years later. Torres married Maria Alejandra in September 2001, his third marriage. They have a son, Hector Alexander, born on January 9, 2004.[6]

T. Roth and Another Pretty Face

This article uses material from the article Tico Torres from the free encyclopedia Wikipedia and it is licensed under the GNU Free Documentation License.