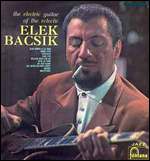 Bacsik was born in Budapest, Hungary, the son of Arpad Bacsik and Erzsebet Pocsi, of Romani ethnicity. He studied classical violin at the Budapest Conservatory before moving on to jazz guitar. In his teens, he recorded with Geza Szabo and Jozsef Quitter, then toured Europe with Mihaly Tabanyi. He lived in Paris in the 1950s, recording with French musicians and with American musicians who were passing through, such as Dizzy Gillespie, Lou Bennett, Art Simmons, and Quentin Jackson. In 1966, he moved to America and worked with Teresa Brewer until 1974. He played at the Olympic Games Jazz Festival in Los Angeles in 1984.[2]

Bacsik played guitar on Gillespie's Dizzy on the French Riviera (1962) and later played violin with Gillespie at the Newport Jazz Festival in 1974. His violin playing is featured on I Love You (1974) and Bird and Dizzy: A Musical Tribute (1975).

This article uses material from the article Elek Bacsik from the free encyclopedia Wikipedia and it is licensed under the GNU Free Documentation License.

Wolfgang Amadeus Mozart 3. Satz aus dem Klavierkonzert Nr. 24 c-moll KV 491
Update Required To play the media you will need to either update your browser to a recent version or update your Flash plugin.