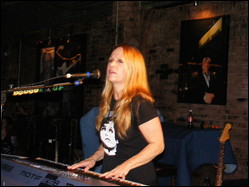 Charlotte Irene Caffey (born October 21, 1957, Santa Monica, California) is an American rock and roll guitarist and songwriter, best known for her work in the Go-Go's in the 1980s, including writing "We Got the Beat."

Caffey began her musical career as a bass guitar player in the early Los Angeles punk band The Eyes before joining the Go-Go's in 1978 and switching to guitar.[1] She remained friends with fellow band member Belinda Carlisle. From 1988 till 1992, she led her own band, The Graces, with Meredith Brooks and Gia Ciambotti, who released a 1989 album, Perfect View. Caffey also co-wrote the theme song to the television series, Clueless, with Anna Waronker, and played piano on the album version of "Foolish Games," by Jewel, as well as co-writing the No. 1 U.S. country hit "But for the Grace of God" with Keith Urban.[1]

She grew up in Glendale, California, and graduated from Immaculate Heart College. She is also in Ze Malibu Kids with her husband, the Redd Kross singer and guitarist, Jeff McDonald; their only child, a daughter named Astrid, was born in 1995.

She was the third of thirteen children born to Ann and Michael Caffey, a well-known television director from the mid-1960s on into the 1990s. Charlotte semi-retired in the late 1980s because of crippling carpal tunnel syndrome.[2]

Her brother Tom composes music for films; his most recent work was the trailer for 10,000 BC.

This article uses material from the article Charlotte Caffey from the free encyclopedia Wikipedia and it is licensed under the GNU Free Documentation License.