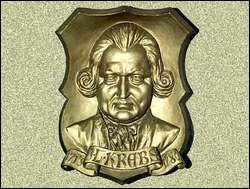 Krebs was born in 1713 in Buttelstedt to Johann Tobias Krebs, an organist. At least three of his brothers were musically talented. Krebs was sent to Leipzig to study organ, lute, and the violin.[1]

Krebs studied with Johann Sebastian Bach on the organ. Bach (who had also instructed Krebs's father) held Krebs in high standing. From a technical standpoint, Krebs was unrivaled next to Bach in his organ proficiency. However, Krebs found it difficult to obtain a patron or a cathedral post. His Baroque style was being supplanted by the newer galant music style and the classical music era.

Krebs took a small post in Zwickau,[1] and in 1755 (five years after the death of Bach, which is normally referred to as the end of the Baroque period) he was appointed court organist of Saxe-Gotha-Altenburg under Prince Friedrich.[1] Krebs had seven children and struggled to feed his family. Despite never holding a court composer post, and never being commissioned for a work, Krebs was able to compose a significant collection of works, though few were published until the 1900s.

Krebs's counterpoint is considered by many to be comparable to Bach's, but it was old-fashioned and excessively complex for the galant era, which espoused clarity and simplicity.

Krebs's Fantasia in F minor for oboe and organ is one of his best-known works, as is the Eight Short Preludes and Fugues that are sometimes attributed to him as well as to his father and J.S. Bach. He is also remembered for two large-scale concertos for lute and orchestra. Krebs's three sons became well-known performers in their day, and one of them became a noted Lieder composer.

Krebs’ organ works include the following:[2]

This article uses material from the article Johann Ludwig Krebs from the free encyclopedia Wikipedia and it is licensed under the GNU Free Documentation License.