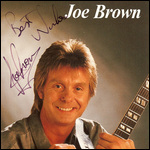 He has worked as a rock and roll singer and guitarist for more than five decades. He was a stage and television performer in the late 1950s and a UK recording star in the early 1960s.[2] He has made six films, presented specialist radio series for BBC Radio 2, appeared on the West End stage alongside Dame Anna Neagle and has written an autobiography. In recent years he has again concentrated on recording and performing music, playing two tours of around 100 shows every year and releasing an album almost every year.

Described by the Guinness Book of British Hit Singles & Albums, as a "chirpy Cockney", Brown was one of the original artists managed by the early rock impresario Larry Parnes.[1] He is highly regarded in the music business as a "musician's musician" who "commands respect and admiration from a wide spectrum of artists".[2]

Brown was born in Swarby, Lincolnshire. His family moved to London when he was two and ran the Sultan public house in Grange Road, Plaistow.[3] In 1956, Brown formed The Spacemen skiffle group,[2] which lasted until the skiffle movement faded towards the end of the 1950s. In 1958 Brown was spotted by television producer Jack Good who hired him as lead guitarist in the orchestra of his new TV series, Boy Meets Girls.[4] During this period he backed a number of U.S musicians such as Gene Vincent and Eddie Cochran on their U.K tours.[5]

Brown signed a management agreement with impresario Larry Parnes[6] and signed to Decca Records. He charted with "The Darktown Strutters Ball" in 1960 and had UK Top 10 hits on the Piccadilly label in 1962-63 with "A Picture Of You", "It Only Took A Minute" and "That's What Love Will Do".[2] Piccadilly's release of Brown's "Crazy Mixed Up Kid" in April 1961 was the label's first single.[7] Brown's recording band was a collection of session musicians, and was named the Bruvvers by Jack Good to give Brown the identity of having his own backing band for record releases. It was in 1962 when he needed a band to tour with him that 'Joe Brown and the Bruvvers' was cemented, containing two members of the Spacemen, brothers Tony and Pete Oakman, who had also remained with him in the "Boy Meets Girls" band.[2]

Brown was voted 'Top UK Vocal Personality' in the 1962 NME magazine poll.[1] During the 1960s Brown appeared in a number of films, pantomime and stage musicals. In December 1963, the film What a Crazy World, based on a stage play, starring Brown and Marty Wilde among others, had its world premiere in London,[8] while he also starred in the hit musical Charlie Girl in the West End between 1965 and 1968, and starred in the musical comedy film Three Hats for Lisa in 1965, alongside Una Stubbs, Sophie Hardy and Sid James . He presented the children's television series, Joe & Co, on BBC Television, three series of The Joe Brown Show for ITV.

In 1972, he formed another band, Brown's Home Brew, which played rock and roll, country and gospel music and featured his wife, Vicki Brown, who died of cancer in 1991, and Pete Oakman from the Bruvvers. This eclectic collection of musical styles, together with his hits, became the basis of his live sets ever since.

In the 1980s, Brown presented a daytime quiz show on ITV called Square One; its success led him to recording a pilot for the prime time game show The Price Is Right but ATV selected Leslie Crowther for the full-time presenting role when the series launched.

George Harrison was best man at Brown's second marriage in 2000; Brown had appeared on two songs on Harrison's album Gone Troppo, and also featured on a track on Harrison's last album, Brainwashed. Following Harrison's death from lung cancer on 29 November 2001, Brown appeared with his group at the tribute concert Concert for George singing "Here Comes the Sun", "That's The Way It Goes" and "I'll See You in My Dreams", accompanying himself on the ukulele for the latter.[9]

Brown still performs and makes occasional television appearances. In 2005 he co-wrote a musical, Don't You Rock Me Daddio, with songwriter Roger Cook,[10] while in December 2006, he was one of three guest hosts of Sounds of the 60s on BBC Radio 2 during the absence of host Brian Matthew, having already presented two series on rock and roll for the same station.

In 2008, Brown's 50th anniversary celebrations included a UK gold album for sales over 100,000 copies of Joe Brown - The Very Best Of, a 37-date spring tour, an all-star concert at the Royal Albert Hall with Mark Knopfler, Jools Holland, Dennis Locorriere, Dave Edmunds, Sam Brown, Chas & Dave and others, and a 36-date autumn-winter tour.

His album More Of The Truth was released in the UK on 13 October 2008, and early in 2009 the US musical instrument manufacturer Kala launched a series of 'Joe Brown' ukuleles. At the Mojo magazine's awards in London on 11 June 2009, Brown was presented with the lifetime award for outstanding contribution to music after 51 years' recording. Mojo's album, Harrison Covered (November 2011), to mark the tenth anniversary's of George Harrison's death, included Brown's recording of the former's "That's the Way It Goes".

Brown was appointed Member of the Order of the British Empire (MBE) in the 2009 Birthday Honours for services to music.[11]

In late 2010 Joe Brown was asked by Rick Parfitt of Status Quo to support them for the arena section (9 shows) of their UK tour in late 2010[1] and he has continued to tour throughout 2011. A triple DVD and CD set of the latter tour was released of his show at the Liverpool Philharmonic.[12]

Brown's daughter, Sam Brown, is also a singer and his son, Pete Brown,[13] is a record producer who produced all but one of Brown's nine most recent albums and also tours with Joe. Sam is also an accomplished ukulele player and runs two ukelele orchestras.

- Credited to Joe Brown and the Bruvvers

This article uses material from the article Joe Brown (singer) from the free encyclopedia Wikipedia and it is licensed under the GNU Free Documentation License.