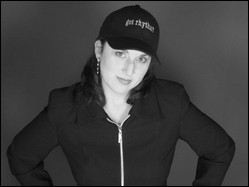 Rebeca Mauleón is an American pianist, composer, arranger and writer, specializing in salsa and other Latin American and Afro-Caribbean music.

Mauleón was born in Santa Monica, California in 1962. She began her professional career in her teen years as a performer and recording artist, and worked with many noted musicians in a variety of musical genres. She has written several texts and articles about the history of Latin and Caribbean music, including the critically acclaimed Salsa Guidebook.

Since her early twenties, she has performed and recorded with celebrities in the Latin and jazz music scenes, including Tito Puente, Carlos Santana, Cachao, the celebrated conguero Carlos "Patato" Valdes, Armando Peraza, Giovanni Hidalgo, Joe Henderson, Sheila E, Steve Winwood, Michael Nesmith and others, and has made a name for herself as one of very few female band-leaders in Afro-Caribbean jazz.

As a producer, Mauleón has been involved in a wide array of music-related projects, from film and television documentaries to music software companies and instructional DVDs.

Her solo recordings Round Trip, Latin Fire and Descarga en California have received international critical acclaim as well as top-ten status on leading Latin music industry charts. She has appeared at numerous prominent national and international music festivals, including the Women in Jazz Festival at the Kennedy Center in Washington DC, the Monterey Jazz and San Francisco Jazz Festivals, among others.

As musical director of Mickey Hart's celebrated Planet Drum ensemble, Mauleón has performed throughout the U.S., appearing at Woodstock in 1999 as well as on the Conan O'Brien and Regis and Kathy Lee shows. In 2001 she was the recipient of the prestigious Meet the Composer New Residencies Award, one of the nation's most coveted composition awards, and has also been a Sundance Composers fellow.

She is a professor of Latin American, Caribbean and jazz music as well as composition, and has taught at several universities around the world. Also, she has served as a musicological consultant to National Geographic. Mauleón was appointed Director of Education at SFJAZZ in 2011.

Rebeca's powerful style at the piano and her high-energy musical direction have been dubbed "visceral" (Billboard Magazine), "fiery" (Utne Reader), and critics have lauded her as "one of the hippest band-leaders in Latin music today" (Allmusic).

This article uses material from the article Rebeca Mauleon from the free encyclopedia Wikipedia and it is licensed under the GNU Free Documentation License.