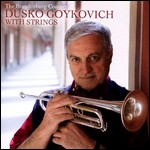 born on 14/10/1931 in Jajce, Kanton Zentralbosnien, Bosnia and Herzegovina

Dusko Goykovich [Dusan Gojkovic] (born October 14, 1931 in Jajce, Yugoslavia) is a trumpet and flugel horn player, and a jazz arranger and composer.

Very active in Europe during the 1950s, Goykovich went to the United States in 1961 and studied at Berklee School of Music. After that, he played with the bands of Maynard Ferguson (1963-64) and Woody Herman (1964-66). He also collaborated with Mal Waldron and Philly Joe Jones, between others.

Since 1967, Goykovich lived in Europe, leading his own groups, composing, arranging and teaching. He also played with the Clarke-Boland Big Band until it disbanded in 1973, and co-led a Euro-American 12-piece band with Slide Hampton from 1974-75.

This article uses material from the article Dusko Goykovich from the free encyclopedia Wikipedia and it is licensed under the GNU Free Documentation License.

Johannes Brahms Ungarischer Tanz Nr. 6 Vivace
Update Required To play the media you will need to either update your browser to a recent version or update your Flash plugin.