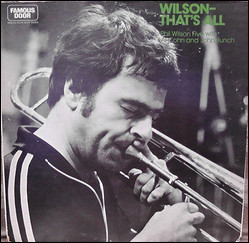 Phillips Elder Wilson, Jr. (born January 19, 1937 in Belmont, Massachusetts) is a jazz trombonist, arranger, and teacher. He might be best known as an instructor at the Berklee College of Music and a former chairman at the jazz division of the New England Conservatory of Music.

He began on piano, but was advised to switch to trombone due to his having a mild form of dyslexia. This condition did not hamper his music and by fifteen he had turned professional. He played for Herb Pomeroy's band from 1955 to 1957 and after that toured with The Dorsey Brothers. He would also work with Woody Herman's band and in the 1960s wrote music for Buddy Rich.[1]

By the mid-1960s he had made a name for himself as an educator. He had joined the faculty at Berklee in 1965. He formed an ensemble there that became one of the most well-regarded college jazz bands.[2]

This article uses material from the article Phil Wilson (trombonist) from the free encyclopedia Wikipedia and it is licensed under the GNU Free Documentation License.