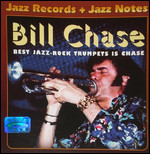 Bill Chase was born William Edward Chiaiese on October 20, 1934 to an Italian-American family in Squantum, Massachusetts. His parents John and Emily changed their name to Chase, realizing Chiaiese was difficult for Americans to pronounce. Bill's father had played trumpet in the Gillette Marching Band and encouraged his son's musical interests, which included a flirtation with violin and drums. In his mid-teens Bill settled on the trumpet. While still in high school in 1950, Chase attended his first Stan Kenton concert, featuring Maynard Ferguson on high note solos, and Bill was hooked from then on. After graduating from high school, he studied classical trumpet at the New England Conservatory, but soon switched to the Schillinger House Of Music, now known as Berklee College of Music. Chase's primary instructors were Armando Ghitalla, John Coffey and Herb Pomeroy.

Chase played lead trumpet with Maynard Ferguson in 1958 and Stan Kenton in 1959, and most notably during the 1960s in Woody Herman's Thundering Herd[1]. Recordings of the Herman band from that time period, including Woody's Winners, Live in Antibes, Encore, 1963, My Kind of Broadway, Blue Flame, Live in Seattle, Somewhere, Live at Newport 1966, Heavy Exposure, Woody Herman & the Fourth Herd, and Jazz Hoot are considered some of the most exciting in the Herman discography. The band also filmed several television appearances for the program Jazz Casual. One of Chase's original charts from this period, "Camel Walk," was published in the 1963 Downbeat magazine yearbook. Between '66-'70 Bill freelanced in Las Vegas working with Vic Damone, Tommy Vig and others. In '67 Bill led a six piece organization at the Dunes and Riviera Hotel(s) where he was featured in the Frederick Apcar lounge production of vive Les Girls, for which Chase arranged the music.

Chase (the band) released their debut album Chase in April 1971. Bill Chase was joined by Ted Piercefield, Alan Ware and Jerry Van Blair, three veteran jazz trumpeters who were also adept at vocals and arranging. They were backed up by a rhythm section consisting of Phil Porter on keyboards, Angel South on guitar, Dennis Johnson on bass and Jay Burrid on percussion. Rounding out the group was Terry Richards, who was featured as lead vocalist on the first album. The album contains Chase's best-known song, "Get It On", released as a single that spent 13 weeks on the charts beginning in May 1971. The song features what Jim Szantor of Downbeat magazine called "the hallmark of the Chase brass — complex cascading lines; a literal waterfall of trumpet timbre and technique." The band received a Best New Artist Grammy nomination, but was edged out by rising star Carly Simon.

Chase released their second album, Ennea, in March 1972; the album's title is the Greek word for nine, a reference to the nine band members. The original lineup changed midway through the recording sessions, with Gary Smith taking over on drums and G. G. Shinn replacing Terry Richards on lead vocals. Although the first Chase album sold nearly 400,000 copies, Ennea was not as well received by the public. One likely reason was a shift away from trumpet sections. As Bill Chase put it in a Downbeat interview, "I don't want people to be heavily conscious of a trumpet section. They should just hear good things, but not be clobbered over the head with brass." A single, "So Many People," received some radio play, but the side-two-filling "Ennea" suite, with its tightly chorded jazz arrangements and lyrics based on Greek mythology, was less radio-friendly.

Following an extended hiatus, Chase reemerged early in 1974 with the release of Pure Music, their third album. Featuring a new lineup, yet keeping the four-trumpet section headed by Bill Chase, the group moved further from the rock idiom and became more focused on jazz. Variety magazine called Pure Music "probably Chase's most commercial effort, and their brand of jazz could have a commercial impact." The songs were written by Jim Peterik of the Ides of March, who also sings on two songs on the album, backing up singer and bassist Dartanyan Brown.

Chase's work on a fourth studio album in mid-1974 came to an end on August 9, 1974.[2] While en route to a scheduled performance at the Jackson County Fair, Chase died in the crash of a chartered twin-engine Piper Twin Comanche [3] in Jackson, Minnesota at the age of 39.[2] Also killed, along with the pilot, Daniel Ludwig (41) of Chicago and Co-Pilot Linda Swisher (26) of Wheeling, Illinois, were keyboardist Wally Yohn, drummer Walter Clark and guitarist John Emma.[2] In 1977 a Chase tribute band (composed primarily of the original lineup, plus Walt Johnson) recorded an album entitled Watch Closely Now.

Chase was part of a radio promotion (WISM)in Madison, WI in the early 70's. Chase would play a concert at the high school whose students submitted the most postcards to a Madison radio station. The students from Edgewood High School won the concert. (Jonathon W. Little, Charley Rock-n-roll Simon, WISM AM1480, Madison, WI)

At the beginning of his career, Bill Chase played a Martin Committee model 2B trumpet with a custom-made Tottle mouthpiece, then on Woody Herman's band switched to a custom Jet-Tone model and a Getzen 900s trumpet, in late '65 he switched to a Schilke B6 model. Prior to the release of his album "Chase", Bill Chase started playing on a Schilke B6LB trumpet. The model 6 has a "medium" bore and a "medium-large" bell, according to the Schilke company. The Schilke company does not release specific bore measurements, primarily because the bores of their trumpets have varying sizes "to assist intonation" but the B6 mainly has bore measurements beginning at .450" and tapering out to .463". The "L" in "B6LB" designates a tunable bell, and the "B" on the end designates a beryllium bell. To go with the Schilke trumpet, Bill Chase had Renold Schilke make a copy of his Jet-Tone mouthpiece late in 1971; the Schilke 6A4a went on the market in 1973. However, the 6A4a mouthpiece, while marketed as the "Bill Chase mouthpiece", is not the same mouthpiece that Bill Chase himself used, as the Schilke mouthpiece he played was a direct copy of the Jet Tone and had a more of a drop off right below the rim bite than the 6A4a available today. The Jet-Tone mouthpiece that is called the "Vintage Bill Chase" model is not exactly like the mouthpiece that Bill Chase used either. There are, in fact, no mouthpieces exactly like Bill Chase's that are currently in production.

Chase was a great advocate of long tones as an exercise for developing the embouchure, and attributed much of his ability in the upper register of the trumpet to this practice. He was also physically fit, having a set of exercises that he performed frequently. These included stretching routines learned from female dancers in New York's Latin Quarter, along with weightlifting.[4]

1957 Berklee Jazz in the Classroom Vol.1

This article uses material from the article Bill Chase from the free encyclopedia Wikipedia and it is licensed under the GNU Free Documentation License.

Johan August Söderman "Seemannsleben" Intermezzo für Orchester
Update Required To play the media you will need to either update your browser to a recent version or update your Flash plugin.