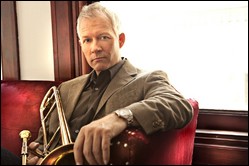 Andy Martin is an American virtuoso jazz trombonist. Among other acts, he is a member of Gordon Goodwin's Big Phat Band and the Bill Holman big band. He has played in over 100 movies, including the trombone solo in the opening credits of Monsters, Inc. He has played on television shows such as Family Guy, King of the Hill, Dancing with the Stars, and American Dad. Martin was also the lead trombone on the show American Idol in seasons 1-3.

This article uses material from the article Andy Martin (American musician) from the free encyclopedia Wikipedia and it is licensed under the GNU Free Documentation License.