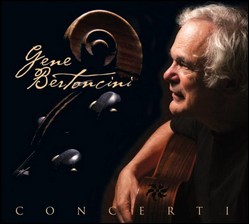 Bertoncini was born in New York City,[1] where he was raised in a musical family. His father played guitar and harmonica. Bertoncini began playing guitar at age seven and by age sixteen was appearing on television. He graduated from high school and attended the University of Notre Dame, where he obtained a degree in architecture.[1][2][3] Bertoncini resides in New York City.

Early in life, Bertoncini had lessons with Johnny Smith. After college Bertoncini moved to Chicago where he became immersed in the jazz scene, working with Carmen McRae. He returned to New York and played with vibraphonist Mike Mainieri and then played in one of Buddy Rich's ensembles. Bertoncini's career has included playing with Benny Goodman, Wayne Shorter, Hubert Laws, Paul Desmond, Tony Bennett, Lena Horne, Nancy Wilson, Vic Damone, and Eydie Gorme among others.

Bertoncini had a long-running duo with bassist Michael Moore. He was part of the staff orchestras on shows featuring Merv Griffin, Jack Paar and The Tonight Show Starring Johnny Carson. After hearing a Julian Bream record at the advice of Chuck Wayne, Bertoncini began studying classical guitar and brought the instrument into playing jazz.[4] For some eighteen years, Bertoncini played Sunday and Monday evenings at the Bistro La Madeleine on West 43rd St. in New York City.

Bertoncini has been on the faculties of Eastman School of Music, the New England Conservatory, New York University and the Banff School of Fine Arts in Alberta, Canada. Gene Bertoncini is on the faculty of William Paterson University in Wayne, New Jersey. He is also on the staff of the Tritone Jazz Fantasy Camps.

Review of Acoustic Romance and The Good Stuff: A Tribute to Charlie Byrd:
"While electric instruments dominate the jazz guitar world, a minority of players choose to use the acoustic nylon-string, not only for its sonic properties but also because it more agreeably supports fingerstyle technique, which opens up a whole spectrum of musical possibilities not otherwise obtainable. One of the finest players among this discerning breed is Gene Bertoncini, whose command of harmony and texture can transform even the most mundane tune into an intriguing, multidimensional masterpiece, something he does with certainty on both Acoustic Romance and The Good Stuff, varying projects that showcase the scope of his considerable abilities." (Jim Ferguson, JazzTimes)[5]

Review of Body and Soul:
"Gene Bertoncini--who plays the nylon-string acoustic guitar with his fingers, a situation ideally suited for solo work--creates sounds that are refined, elegant, and complex. His playing works a tune from the inside, fully exploring its harmonic, melodic, and textural implications much like a classical composer develops an idea on paper." (Jim Ferguson, JazzTimes)[6]

Review of Just the Two of Us:
"This album, recorded live in 1998, pairs not only two masters of the guitar, but also two distinctly different instruments and approaches. Bertoncini employs a nylon-string with fingerstyle technique akin to that of a classical player, while Wilkins uses a traditional archtop electric and essentially is a pick specialist. The net outcome is intricate, spontaneous music that is frequently brilliant in both conception and execution." (Jim Ferguson, JazzTimes)[7]

This article uses material from the article Gene Bertoncini from the free encyclopedia Wikipedia and it is licensed under the GNU Free Documentation License.