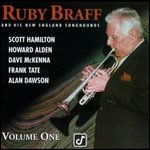 Reuben "Ruby" Braff (March 16, 1927 – February 9, 2003) was an American jazz trumpeter and cornetist. Jack Teagarden was once asked about him on the Gary Moore TV show and described Ruby as "the Ivy League Louis Armstrong."

Braff was born in Boston. He was renowned for working in an idiom ultimately derived from the playing of Louis Armstrong and Bix Beiderbecke.

He began playing in local clubs in the 1940s. In 1949, he was hired to play with the Edmond Hall Orchestra at the Savoy Cafe of Boston. He relocated to New York in 1953 where he was much in demand for band dates and recordings.

He died February 9, 2003, in Chatham, Massachusetts and resided in Harwich, Massachusetts. He also spent a good part of his life living in the Riverdale section of The Bronx, New York.

With Scott Hamilton and Dave McKenna

This article uses material from the article Ruby Braff from the free encyclopedia Wikipedia and it is licensed under the GNU Free Documentation License.