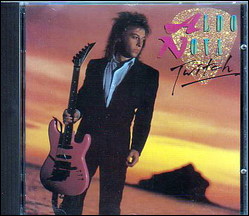 Aldo Nova (born Aldo Caporuscio on November 13, 1956) is a Canadian guitarist, keyboardist, vocalist, songwriter, and producer. Nova initially gained fame with his self-titled debut album Aldo Nova in 1982 which climbed to Billboard's number 8 position, and its accompanying single, "Fantasy", which climbed to number 23 on the Billboard Hot 100.[2]

Signing with Portrait Records, Nova released a self-produced album Aldo Nova in 1982 that had two singles: "Fantasy" and "Foolin' Yourself". His second album Subject...Aldo Nova from 1983 had two singles: "Monkey on Your Back" and "Always Be Mine". His third album Twitch from 1985 had two singles: "Rumours of You" and "Tonite (Lift Me Up)". Nova was displeased with the album and the record company's insistence on making a more commercial album. After supporting the Twitch album Nova asked to be released from his contract, which the record company would not do. Nova decided to move to Montreal and work on jingles, waiting for his contract to expire in 1991, stating he would not work on an album he didn't have full creative control over. In 1990, Aldo Nova wrote the main guitar riff that would be used in the Jon Bon Jovi song "Blaze of Glory". In 1991, to return the favour, Bon Jovi worked with Nova on his Jambco Records (Jon Bon Jovi's label) release Blood on the Bricks. It had three singles: "Blood on the Bricks", "Medicine Man", and "Someday". In addition, Nova produced some early Celine Dion albums. He co-wrote the hit song, "A New Day Has Come" for Dion, and has been featured playing guitar, synthesizer, and percussion on her records. He also wrote her songs "Your Light" and "I Can't Fight the Feelin'", "You and I" (which was used as Hillary Clinton's campaign song and as the Air Canada theme song). He co-wrote the Blue Öyster Cult song "Take Me Away" and was a member of "The Guitar Orchestra Of The State Of Imaginos" on their album Imaginos.

In 1996, he received a Grammy Award as producer for Celine Dion's "Falling into You" for Album of the Year. In 1997, he released the much acclaimed, mostly instrumental album, Nova's Dream, which featured a different side of his talents as a musician writer. The album is considered by his fans as one of his best alongside his eponymous debut and Subject. He co-wrote the Latin Grammy nominated song "Aqui" for the Chilean rock group La Ley on the album Uno. He also co-wrote and co-produced 4 other tracks on that album, which later that year won a Grammy for best Latin/Alternative/Rock Album.

As a songwriter, Nova's hits include Clay Aiken's "This Is The Night" (co-written with Chris Braide and Gary Burr), which in the US was a number one hit and the best selling single of 2003. He was also the only writer to have written or co-written five songs on Dion's Taking Chances album.[3]

In 2003, Nova received an International Achievement Award at the SOCAN Awards in Toronto for co-writing the Dion song "A New Day Has Come".[4]

This article uses material from the article Aldo Nova from the free encyclopedia Wikipedia and it is licensed under the GNU Free Documentation License.