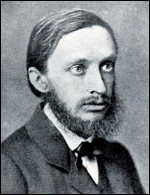 Goetz was born in Königsberg, then in East Prussia. After studying in Berlin, he moved to Switzerland in 1863. After ten years spent as a critic, pianist and conductor as well, he spent the last three years of his life composing. The conductor Felix Weingartner found it "incomprehensible that his delightful opera comique, Der Widerspanstigen Zähmung, should have entirely disappeared from the repertoire."[1] Another great admirer of Goetz's compositions was George Bernard Shaw, who praised Goetz's Symphony in F above anything in the genre by Mendelssohn, Schumann, and Brahms.[2]

Goetz, the son of a salesman, came into contact with music early in his life. However, he did not receive his first serious piano lesson until 1857 although he already had begun to compose some years before. At the end of the 1850s, he began to study for a degree in mathematics, but broke this off after three terms to study at the Stern conservatory in Berlin, where he studied piano and composition with Hans von Bülow. In 1862 he successfully graduated from the conservatory.

The following year, Goetz was appointed as city organist of Winterthur in Switzerland (thanks to the assistance of Carl Reinecke), where he taught the piano and began to make his name as a composer. In 1868 he married, and two years later moved to the village of Hottingen, today a suburb of Zurich, but remained employed in Winterthur until 1872. Between 1870 and 1874, he wrote reviews for a music magazine.

In the last years of his life, Goetz had to withdraw from teaching and concert performance due to the increasing seriousness of his tuberculosis, from which he had suffered from the 1850s and from which he would eventually die, aged 35, at Hottingen.

Although Goetz showed active interest in the important artistic trends of his own time (on the one hand Liszt and Wagner, on the other Brahms), his own compositional style was more influenced by Mozart and Mendelssohn, and to a lesser degree by Schumann. Goetz's music is defined by lyricism and great clarity, and in general terms can be defined as quiet and introverted. Goetz almost completely avoided spectacular effects. Great mastery of compositional technique is characteristic of Goetz's style, which is particularly apparent in the connectedness of motifs and the technical depth of movements.

For a long time, Goetz was almost forgotten, although Gustav Mahler performed a number of his works; only since the 1990s have his works been regarded once more as of importance.

Goetz was no radical forger of new musical paths, but rather a composer in total control of his compositional technique, and whose works through their high standard give lie to the labelling of Goetz as a composer of the lower order.

Goetz's compositions include a symphony, two piano concertos, a violin concerto in one movement, much piano music, a piano trio, piano quartet, piano quintet, and sonata for piano four-hands (two players). There are also two operas, Der Widerspänstigen Zähmung (based on Shakespeare's The Taming of the Shrew) and, much less successful, the three-act opera Francesca da Rimini, to a libretto by the composer and Joseph Victor Wildmann, based on Dante's Inferno (premiered at Mannheim, September 30, 1877).[3][4]

This article uses material from the article Hermann Goetz from the free encyclopedia Wikipedia and it is licensed under the GNU Free Documentation License.