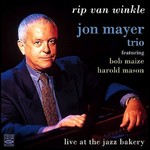 In the '50s he was a frequently appearing member of the NYC music scene, playing with Kenny Dorham, Tony Scott (replacing Bill Evans), Pete LaRoca and Ray Draper. He recorded with Jackie McLean and John Coltrane.

In the '60s and '70s, Mayer remained active, playing in both New York and Europe with the Thad Jones / Mel Lewis Jazz Orchestra, Dionne Warwick, Sarah Vaughan and the Manhattan Transfer. During those days he wrote songs recorded by Les McCann and Nancy Wilson.

Mayer then entered a 13-year period of inactivity during which he rarely performed. In his repertoire there is a song called Rip Van Winkle which refers to this period of his life.

In 1991 Mayer returned to music. He settled in Los Angeles and recorded "Round Up The Usual Suspects" in 1995, a piano trio session with Ron Carter and Billy Higgins.

This article uses material from the article Jon Mayer from the free encyclopedia Wikipedia and it is licensed under the GNU Free Documentation License.