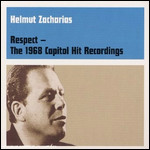 Helmut Zacharias (27 January 1920 – 28 February 2002) was a German violinist and composer who created over 400 works and sold 14 million records. He also appeared in number of films, usually playing musicians.[2][3]

Helmut Zacharias was born in Berlin. His father Karl was a violinist and conductor, and his mother was a singer.[2] He started having lessons from his father at the age of 2 and a half and at 6 he played at the Faun club, a cabaret venue on the Friedrichstraße in Berlin.[4]

At the age of 8, Zacharias became the youngest student in Gustav Havemann's masterclass at the Berlin Academy of Music.[5] Aged 11, he played on radio for the first time with a performance of Mozart's Violin Concerto No. 3 in G major and began touring in 1934 at the age of 14.[4] At this time, in the 1930s, the records of Django Reinhardt and Stéphane Grappelli's all-string jazz band were available in Germany and they heavily influenced Zacharias's musical style.[6]

In 1940, Zacharias was discovered by Lindström-Electrola[6] (then-name of the German branch of EMI) and in 1941 had his first mainstream success with Schönes Wetter Heute.[1] By the 1950s, he was considered to be one of the best jazz violinists of Europe and was dubbed "The Magic Violinist" and "Germany's Mr. Violin". In 1956 he achieved his greatest success in the United States with the release of "When the White Lilacs Bloom Again" which, on 22 September, reached number 12 on the Billboard Hot 100.[7][8] On 21 November 1964 he reached number 9 in the UK Singles Chart with Tokyo Melody,[9] following its use as theme music for the BBC's coverage of the 1964 Summer Olympics.[10][11] Zacharias moved to Switzerland in the late 1950s[11] and continued playing with many other famous artists, including Yehudi Menuhin. From 1968 to 1973 he appeared in his own television show. In 1985, he was awarded the Order of Merit of the Federal Republic of Germany.[5]

Zacharias had been detected as suffering from Alzheimer's disease in 1995[2] and retired from public life in 1997[1] before the fact was publicly acknowledged on World Alzheimer's Day in 2000.[4] He died in 2002 in Brissago, Switzerland[2] and is buried in Ohlsdorf Cemetery in Hamburg.[12]

Zacharias was married to Hella (née Konradat) from 1943 until his death. Together they had two sons, Stephan and Thomas, and a daughter, Sylvia.[2] Stephan, born in 1956, is a composer whose credits include the soundtrack to Academy Award-nominated film Downfall,[13][14] while Thomas was an international athlete.

This article uses material from the article Helmut Zacharias from the free encyclopedia Wikipedia and it is licensed under the GNU Free Documentation License.