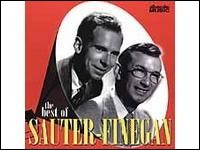 William James Finegan (3 April 1917 4 June 2008) was an American jazz bandleader, pianist, arranger, and composer. He was an arranger in the Glenn Miller Orchestra in the late 1930s and early 1940s.

Born in Newark, New Jersey, Finegan grew up in a household full of piano players. While growing up in Rumsen, NJ he studied piano with Elizabeth Connelly, piano and musicianship with flautist/alto saxophonist Rudolph John Winthrop (1883-1959), himself a student of Engelbert Humperdinck. He spent time studying at the Paris Conservatory and had his first professional experience leading his own piano trio. Finegan was offered a job as a staff arranger for Glenn Miller after Tommy Dorsey bought a copy of his "Lonesome Road" and recommended him; he remained with Miller until 1942, and arranged such hits as "Little Brown Jug", "Sunrise Serenade", "Song of the Volga Boatmen", and "Jingle Bells", arranged in collaboration with Glenn Miller. Finegan also arranged music for films in which the band appeared, such as Sun Valley Serenade (1941) and Orchestra Wives (1942). He then worked off and on for Tommy Dorsey from 1942 to 1952, including on the 1947 film The Fabulous Dorseys.

In 1947-48 Finegan studied with Stefan Wolpe in NYC, and lived in Europe from 1948-1950 where he studied with Darius Milhaud and Valerie Soudere, a pianist and composer who premiered Bartók's 3rd Piano Concerto in Paris. After returning to the United States, Finegan and Eddie Sauter formed a highly successful ensemble, the Sauter-Finegan Orchestra, which remained active until 1957. His composition "Doodletown Fifers" was one of the Sauter-Finegan Orchestra's best-known originals. Following this Finegan found work in advertising, writing music for commercials. In the 1970s he arranged for the Glenn Miller Orchestra and Mel Lewis's orchestra. He taught jazz at the University of Bridgeport in the 1980s. He wrote arrangements for cornetist Warren Vaché (with the Scottish String Ensemble) in 2004, and the vocal group Chanticleer until his death in 2008.

He composed "Down For The Count", "Conversation Piece", "Are Ya Jumpin' Jack?", recorded by Glenn Miller and his Orchestra, "Doodletown Fifers", "Tweedle Dee and Tweedle Dum", "Doodletown Races", "Yankee Doodletown", "Pussy Willow", "Bingo, Bango, Boffo", "Hollywood Hat", "Piccalilli Dilly", "Church Mouse", "Alright Already", "Texas Tex", recorded by Tex Beneke and the Glenn Miller Orchestra in 1946, "Child's Play", and "Tail End Charlie" which was released by Glenn Miller and his AAFTC Orchestra as a V-Disc, no. 144A, in March, 1944.

Bill Finegan died on Wednesday, June 4, 2008, in Bridgeport, Connecticut at the age 91. The cause of death was pneumonia.

This article uses material from the article Bill Finegan from the free encyclopedia Wikipedia and it is licensed under the GNU Free Documentation License.