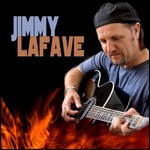 Jimmy LaFave (born July 12, 1955) is an American singer-songwriter and folk musician born in Wills Point, Texas. After moving to Stillwater, Oklahoma, LaFave crafted a musical style called Red Dirt music and became a disciple of the state's most famous folk musician: Woody Guthrie. LaFave is an Advisory Board member and regular performer at the annual Woody Guthrie Folk Festival. In 1996 he received the Kerrville Folk Festival songwriter of the year award and appeared on the TV show Austin City Limits. He has recorded 15 albums and his 2007 release, Cimarron Manifesto, reached the No. 1 mark on the Americana Music Association album chart. In 2012, LaFave released the studio album Depending On The Distance.[1]

While living in Wills Point, Texas, LaFave began playing the drums and later moved to Stillwater, Oklahoma[2] and played in the school band.[1] At age 15 LaFave switched to guitar and began writing and singing his own songs in a band called The Night Tribe.

After graduating from high school LaFave played music at night while working during the day. He had a job as the manager of a music club called Up Your Alley and during this period recorded the albums Down Under in 1979 and Broken Line in 1981. After traveling to several other cities, LaFave relocated to Austin, Texas.[3] Mixing blues, jazz, and country influences he began writing songs inspired by [2] by J. J. Cale, Chet Baker, Bob Dylan and Leon Russell.[4][5]

In 1992 La Fave signed with Colorado-based Bohemia Beat Records and recorded his debut album Austin Skyline which included four Bob Dylan songs[2] and consisted of live performances and recordings from Marcia Ball's home studio.[2] The debut album was followed by Highway Trance in 1994 and Buffalo Return to the Plains in 1995. Between 1997 and 2001, LaFave released three more albums on the label including the 1999 double-CD Trail, which was a 15-year retrospective of live performances and studio outtakes.[6] In December 1995, LaFave won the Songwriter of the Year Award at the Kerrville Folk Festival and in March 1996, received the same honor at the Austin Music Awards sponsored by The Austin Chronicle.[7] LaFave gained nationwide exposure in 1996 through his appearance on the PBS music show Austin City Limits when he was paired with Lisa Loeb for an evening of "acoustic ballads and electrified folk-rock numbers".[8] In 1996, LaFave made an appearance at a tribute to Woody Guthrie held at the Rock and Roll Hall of Fame at the invitation of Guthries daughter.[9][10]

In 1998, LaFave began attending the annual Woody Guthrie Folk Festivals held in Guthrie's hometown of Okemah, Oklahoma and in 2007 became a member of the Woody Guthrie Coalition that organizes the festival.[11][12] LaFave says Woody Guthrie is his musical hero[13] pays homage to him in the song"Woody Guthrie" on the Texoma album.[14] Album reviewers described it as "reminiscient [sic] of the Dust Bowl heritage of Woody Guthrie, the early rock of Chuck Berry, the quiet folk reflections of Bob Dylan, and the rock anthems of Bruce Springsteen."[15] and "honest, thoughtful and sincere" music.[12] LaFave's "red dirt music" sound has been described as a mix of rock, folk, rockabilly, and country, grounded in the landscape of Texas and Oklahoma and can be heard on this album.[6]

In 2003, LaFave produced a Woody Guthrie tribute show called Ribbon of Highway, Endless Skyway. The ensemble show toured around the country and included a rotating cast of singer-songwriters individually performing Guthrie's songs. Interspersed between songs were Guthrie's philosophical writings read by a narrator. In addition to LaFave, members of the rotating cast included Ellis Paul, Slaid Cleaves, Eliza Gilkyson, Joel Rafael, husband-wife duo Sarah Lee Guthrie (Woody Guthrie's granddaughter) and Johnny Irion, Michael Fracasso, and The Burns Sisters. The Godfather of Red Dirt Music Bob Childers, also known as "the Dylan of the Dust,"[16] served as narrator.[17] When word spread about the tour, performers began contacting LaFave, whose only prerequisite was to have an inspirational connection to Guthrie. Each artist chose the Guthrie songs that he or she would perform as part of the tribute. One of the songs Gilkyson chose was "Pastures of Plenty", while Cleaves chose "This Morning I Am Born Again" - a song he wrote using Guthrie's lyrics. One of the songs Paul chose was a song he wrote using Guthrie's lyrics - "God's Promise".[18] LaFave said, "It works because all the performers are Guthrie enthusiasts in some form".[19] The Ribbon of Highway tour kicked-off on February 5, 2003 at the Ryman Auditorium in Nashville. The abbreviated show was a featured segment of "Nashville Sings Woody," yet another tribute concert to commemorate the music of Woody Guthrie held during the Folk Alliance Conference. The cast of "Nashville Sings Woody," a benefit for the Woody Guthrie Foundation and Archives, also included Arlo Guthrie, Marty Stuart, Nanci Griffith, Guy Clark, Ramblin' Jack Elliott, Janis Ian, and others.[20] Also in 2007 at Nora Guthrie's invitation, LaFave spoke and performed at Woody Guthrie's induction into the Oklahoma Hall of Fame.[1]

LaFave left Bohemia Beat for Red House Records and released his 2005 album Blue Nightfall which one reviewer called his "best work yet" and "a great introduction to an important artist".[21] LaFave's second release for Red House Records was the 2007 album Cimarron Manifesto[22] which went to No. 1 on the Americana Music Association chart.[23] In his review of LaFave's Cimarron Manifesto (2007) for the FolkWax E-Zine, Arthur Wood calls LaFave "one of the finest Dylan interpreters ever.[24]

LaFave's 14th release, Depending On The Distance, was released on September 18, 2012. Backing musicians include Austin's Eliza Gilkyson and John Inmon.[27] The 13-track release includes three Dylan covers, including a version of "Red River Shore" that runs more than nine minutes. In her review for The Oklahoman, Brandy McDonnell said: "Jimmy LaFaves first studio album in five years, lives up to the intriguing promise of its title, finding the Oklahoma-Texas troubadour in a contemplative mood whether he is crooning his new original songs, covering an 80s pop smash or reinterpreting anthems penned by Rock and Roll Hall of Famers Bob Dylan and Bruce Springsteen."[28]

This article uses material from the article Jimmy LaFave from the free encyclopedia Wikipedia and it is licensed under the GNU Free Documentation License.