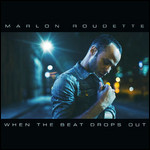 Marlon McVey-Roudette (born 5 January 1983) is a British Vincentian singer, songwriter and rapper. A former member of the band Mattafix, he is famous for his solo songs "New Age" and "When the Beat Drops Out". "New Age" was produced and co-written by hit-maker Guy Chambers, and which was an international hit, reaching number one in Austria, Switzerland and Germany.

Marlon Roudette was born in London and is the son of Cameron McVey, a British music producer,[1] and Vonnie Roudette, a designer and artist of Dominican/Trinidadian descent residing in Saint Vincent and the Grenadines.[2] As a young child he moved with his mother and sister to Trinidad, then to St. Vincent in 1992, where he began his music career, and returned to London when he was 17.[3] Marlon is the stepson of Neneh Cherry.

Roudette's music is inspired by musicians such as Gregory Isaacs and Massive Attack. He is also inspired by Sam Cooke, Aretha Franklin and Sade. He describes his music as a mix of hip hop, R&B and reggae.

On 17 July 2011, Marlon Roudette released "Brotherhood of the Broken" for free download as a promotional single from his debut album. On 20 July Marlon released "New Age" as the first single from the album in Germany for the airplay. On 16 August 2011, "New Age" was available on iTunes Store. The single has reached number 1 in Germany, Austria and Switzerland. His debut album Matter Fixed was released on 2 September 2011, in Austria, Belgium, Slovakia, Denmark, Czech Republic, Germany, Russia, Sweden and Switzerland. On 23 January 2012, it was available in France and in the rest of Europe. On 20 January 2012 Marlon released "Anti Hero (Brave New World)" on iTunes in Germany.[4] His song "The Loss" was featured on Private Practice episode "The Time Has Come", which aired on 2 February 2012.[5]

On 18 July 2014 Marlon released "When the Beat Drops Out" as the lead single from his second studio album Electric Soul, the song has charted in the Top 5 in Austria, Germany, Latvia and Switzerland and n°8 in Italy. He released Electric Soul on 8 August 2014.

This article uses material from the article Marlon Roudette from the free encyclopedia Wikipedia and it is licensed under the GNU Free Documentation License.