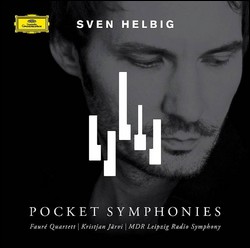 born in 1968 in Eisenhüttenstadt, Brandenburg, Germany

Sven Helbig (born in Eisenhüttenstadt) is a German composer, director and music producer.

In 1996, Sven Helbig and hornist Markus Rindt founded the Dresden Symphony Orchestra. The orchestra is specialized in new, symphonic music in unusual productions and was the first European symphony orchestra to exclusively perform contemporary music.[1] Helbig gave up his managing position in 2007 to focus on his own musical work, resulting in orchestral pieces, film music and electronic music compositions (Breakcore). Helbigs first experience with music began with the clarinet, but he later added the guitar, piano and drums. He studied music in Dresden and taught drums at the Carl-Maria von Weber Musical Academy in Dresden from 1995 to 2008. Helbigs versatility made him a much sought-after producer for crossover projects. After his first international release Mein Herz brennt (2004) he came to the attention of Pet Shop Boys. They had just begun working on their soundtrack to Sergey Eisensteins silent film classic Battleship Potemkin, which was planned to be a combination of electronic and orchestral music.[2] The piece premiered in front of 25,000 spectators on Londons Trafalgar Square, in September 2004.

Since then Sven Helbig has worked as a producer, composer and arranger with Rammstein, Pet Shop Boys, Snoop Dogg, Polarkreis 18, the Fauré Quartett, opera singer René Pape, German rapper Sido and numerous theater productions.[3] In recent years, the artist has delved into work as a director. He directed music videos, stage shows and theatrical multimedia events.[4] For example, he produced the High-rise Symphony on Dresdens 800th anniversary during which the orchestras musicians sat on individual balconies of an old East German apartment building. On behalf of the MDR Symphony Orchestra Helbig produced Kinder der Freiheit to mark the 20th anniversary of the German reunification, in 2009.

Helbigs work builds on the tradition of the Gesamtkunstwerk (all-embracing art form). Often he takes responsibility for content, music and production at the same time.

This article uses material from the article Sven Helbig from the free encyclopedia Wikipedia and it is licensed under the GNU Free Documentation License.