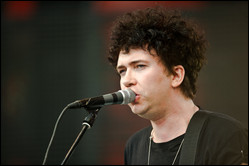 Sune Rose Wagner (born October 7, 1973, Sønderborg, Denmark) is the songwriter, guitarist, and vocalist for noise pop duo, The Raveonettes.[1] Previously, he was part of the band Psyched Up Janis, with whom he recorded three albums.[2]

Wagner formed Western Front in Sønderborg in August 1989, which by 1992 had evolved into Psyched Up Janis, the band also relocating to Copenhagen.[3] After several albums, and after the band relocated first to London and then to the United States, they split up in 1999, playing a farewell concert at the Roskilde Festival. He formed The Tremelo Beer Gut in 1998, and formed his most successful band The Raveonettes with Sharin Foo, after settling in Los Angeles.[4] He has lived in New York City.[1][5] but currently lives in Los Angeles. In 1999-2000 he worked as a photographer's assistant for Søren Solkær Starbird.[6]

Wagner released his first (self-titled) solo album in 2008, his first album in his career sung in Danish, followed by live performances in 2009.[7][8]

This article uses material from the article Sune Rose Wagner from the free encyclopedia Wikipedia and it is licensed under the GNU Free Documentation License.