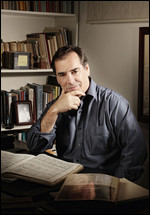 Maximiano Valdés is a Chilean classical musician and orchestral conductor. Mr. Valdés is the Music Director of the Orquesta Sinfonica del Principado de Asturias in Spain.[1] He is also the music director / principal conductor of the Puerto Rico Symphony Orchestra.

He was born in Santiago, Chile, Mr. Valdés made his American debut in October 1987 with the Buffalo Philharmonic and in 1989, he was appointed Music Director of that orchestra, a position he held until 1998.[2][3] During the 07/08 season, Mr. Valdés toured with his orchestra in Asturias. The orchestra traveled Mexico, Spain and China.

Maximiano Valdés has several recordings available[4] and he recently signed on with Naxos to record works by Latin American and Spanish composers with the orchestra in Asturias.

This article uses material from the article Maximiano Valdés from the free encyclopedia Wikipedia and it is licensed under the GNU Free Documentation License.

Giovanni Paisiello Harfenkonzert A-Dur
Update Required To play the media you will need to either update your browser to a recent version or update your Flash plugin.