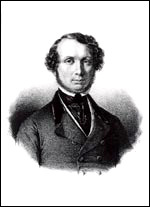 Hans Christian Lumbye (Danish pronunciation: [lɔmˈbyː]; 2 May 1810 – 20 March 1874) was a Danish composer of waltzes, polkas, mazurkas and galops, among other things.

As a child, he studied music in Randers and Odense, and by age 14 he was playing the trumpet in a military band. In 1829, he joined the Horse Guards in Copenhagen, still continuing his music education. In 1839, he heard a Viennese orchestra play music by Johann Strauss I, after which he composed in the style of Strauss, eventually earning the nickname "The Strauss of the North". From 1843 to 1872, he served as the music director and in-house composer for Tivoli Gardens, Copenhagen. Such was his popularity in the Danish capital that many Danes revered him and considered Johann Strauss II as the "Lumbye of the South".

Lumbye is best known for his light compositions, many of which evoke non-musical sources. The Champagne Galop, for example, begins with the "pop" of a champagne cork, and the Copenhagen Steam Railway Galop faithfully recreates the sounds of a train chugging out of a station and grinding to a halt at the next stop. He honored the Swedish Nightingale with a "Souvenir de Jenny Lind, Vals" from 1845.

He was the father of two musician sons, Carl Christian (9 July 1841 - 10 August 1911) and Georg August (26 August 1843 - 1922), who took over his orchestra after his father's death. His grandson Georg Høeberg was an important Danish conductor at Det kongelige Teater.

This article uses material from the article Hans Christian Lumbye from the free encyclopedia Wikipedia and it is licensed under the GNU Free Documentation License.

Ludwig van Beethoven 1. Satz aus der Sinfonie Nr. 6 F-Dur op. 68 "Pastorale"
Update Required To play the media you will need to either update your browser to a recent version or update your Flash plugin.