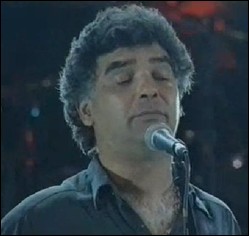 The Gipsy Kings are a group of flamenco, salsa and pop musicians from Arles and Montpellier in the south of France, who perform in Andalusian Spanish. Although group members were born in France, their parents were mostly gitanos, Spanish gypsies who fled Catalonia during the 1930s Spanish Civil War. They are known for bringing Catalan rumba, a pop-oriented music distantly derived from traditional flamenco music, to worldwide audiences. The group originally called itself Los Reyes.

Their music has a particular rumba flamenca style, with pop influences; many songs of the Gipsy Kings fit social dances, such as salsa and rumba. Their music has been described as a place where "Spanish flamenco and gypsy rhapsody meet salsa funk".[1]

The Gipsy Kings, born in France but brought up with Spanish culture, are largely responsible for bringing the sounds of progressive pop-oriented flamenco to a worldwide audience. The band started out in Arles, a town in southern France, during the 1970s, when brothers Nicolas and Andre Reyes, the sons of flamenco artist Jose Reyes, teamed up with their cousins Jacques, Maurice, and Tonino Baliardo.[1] Manitas de Plata and Jose Reyes were a duo who triggered the wider popularity of rumba flamenca (also known as Spanish or gypsy rumba). It was famous singer Reyes, however, who was mostly responsible for the new surge of popular interest when he left Manitas de Plata and started a band of his own, made up of his own sons, which he called "Los Reyes" (as well as being the family name, reyes means "kings" in Spanish).

Los Reyes started out as a gypsy band. They traveled around France, playing at weddings, festivals, and in the streets. Because they lived so much like gypsies, the band adopted the name Gipsy Kings. Later, they were hired to add colour to upper-class parties in such places as St. Tropez, but their first two albums attracted little notice. At this point, the Gipsies played traditional flamenco invigorated by Tonino Baliardo's guitar playing and Nicolas Reyes' voice.

The Gipsy King line-up featured a combination of left, and right-handed guitarists; three of the Reyes brothers (Nicolas, Andre', and Patchai) play guitar left-handed, and play left-hand (and sometimes right-hand) guitars that are strung for right-handers (i.e. with the low "E" string on the bottom), while Diego Baliardo plays a left-handed guitar that is strung for left hand (i.e. with the low "E" string on the top). Together with right-handers Canut and Paul Reyes, and Paco Baliardo, these guitarists focus on delivering the strong underpinning rhythms while the more complex leads are performed by the right-handed and conventionally styled Tonino Baliardo.

They became popular with their self-titled third album, Gipsy Kings, which included the songs "Djobi Djoba", "Bamboléo", and the romantic ballad "Un Amor". Gipsy Kings was popular throughout Europe and in Africa, as well as in the Middle East.

Gipsy Kings was released in the United States in 1989 and spent 40 weeks on the charts, one of few Spanish language albums to do so.[2] The band covered "I've Got No Strings" for the 1991 Disney video and compilation album Simply Mad About the Mouse. Their cover version of "Hotel California" was an example of fast flamenco guitar leads and rhythmic strumming: it was featured in the 1998 Coen Brothers' movie The Big Lebowski.[3] The 2010 film Toy Story 3 featured their rendition of "You've Got a Friend in Me", a Spanish-language version titled "Hay un Amigo en Mi" and performed in a recognisably flamenco style.[4]

The band have been criticised by flamenco purists, but Nicolas Reyes said in an interview that the flamenco world is not in great shape itself and that the band are proud of their success; the Compas album contains more traditional flamenco music.[5]

Some of the individual members of the band have put out their own albums. In 1988 Canut Reyes released his solo project Boléro. He has since released a second solo album titled Gitano. André Reyes recorded a solo album in 1992, but never released it officially. Unlicensed copies were acquired by fans and released online. Tonino Baliardo released his own instrumental album Essences in 2001, re-released in 2003.

Gipsy Kings have collaborated with many renowned artists. These include "Speaking of Dreams" with Joan Baez in 1990, a duet of "My Way" with Francis Cabrel in 1993, a version of Bob Marley's "One Love" sung with his son Ziggy Marley, and Georges Reyes' song "Donde esta el amor" with Nicolas Reyes in 2006. They also performed "Get Up!" with Captain Jack, and covered a version of the Doobie Brothers' "Long Train Running" with Bananarama on their Pop Life album, under the pseudonym Alma de Noche.

The Gipsy Kings consisted of two parent families: Reyes and Baliardo. The Reyes brothers are nephews of Manitas de Plata.

Chico Bouchikhi, a son-in-law of Jose Reyes, was also a member of the group, but he left after the album Mosaïque to create his own band Chico & The Gypsies. Note: As of 2015, only founding/original members Nicolas Reyes and Tonino Baliardo remain in the current Gipsy Kings line-up; current tour promotional notices bill them as "The Gipsy Kings (featuring Nicolas Reyes and Tonino Baliardo)"

This article uses material from the article Gipsy Kings from the free encyclopedia Wikipedia and it is licensed under the GNU Free Documentation License.

Pjotr Iljitsch Tchaikovsky Variationen über ein Rokoko Thema op. 33
Update Required To play the media you will need to either update your browser to a recent version or update your Flash plugin.