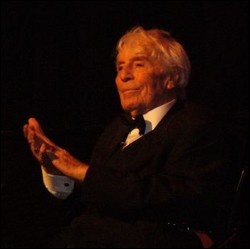 Johan Marius Nicolaas "Johannes" Heesters (5 December 1903 – 24 December 2011) was a Dutch-born actor of stage, television and film as well as a vocalist of numerous recordings and performer on the concert stage, with a career dating back to 1921. Active almost exclusively in the German-speaking world from the mid-1930s, he was a controversial figure for his actions during the Second World War and his success in Nazi Germany.[1] Heesters was considered one of the oldest stage performers in history.

Heesters was born in Amersfoort, Netherlands, the youngest of four sons. His father Jacobus Heesters (1865-1946) was a salesman and his mother Geertruida Jacoba van den Heuvel (1866-1951), a homemaker.

Heesters was fluent in German from a very early age having lived for several years in the household of a German great uncle from Bavaria.[2] Heesters decided to become an actor and a singer at the age of sixteen and began vocal training. Heesters specialized in Viennese operetta very early in his career, and made his Viennese stage debut in 1934 in Carl Millöcker's Der Bettelstudent (The Beggar Student).

Aged 31, Heesters permanently moved to Germany with his wife and daughters in 1935. During his time there, he performed for Adolf Hitler and visited the Dachau concentration camp which made him a controversial figure for many Dutch.[3] Joseph Goebbels placed Heesters on the Gottbegnadeten list as an artist considered crucial to Nazi culture.[4]

Heesters is known to have funded the German war machine by donating money to the weapons industry.[5] While he became a very controversial figure in the late 1970s, Heesters always denied these accusations despite reliable evidence.[6]

Heesters befriended several high-ranking Nazi-officials and SS-officers.[7] Mr. "Jopie" also performed regularly for people such as Hitler and Goering,[8] with the former being known to have been an avid admirer of his acting skills.[9][10] He met Hitler several times and was reportedly Hitler's favorite actor[11] in the role of Danilo.[12] Throughout the war Heesters continued to perform for German soldiers in camps and barracks. He always denied having visited concentration camps, although he did have knowledge of their existence.[13]

According to German author Volker Kühn, Heesters did in fact perform for the SS in Dachau concentration camp. For this claim he uses as evidence the testimony of Dachau inmate Viktor Matejka who worked for the SS and told Kühn he pulled the curtain when Heesters performed in 1941.[14][15] According to German writer Jürgen Trimborn however, the interview with Matejka may not be reliable as it occurred some fifty years after the performance was said to have taken place.[16] In December 2009, Heesters lost his libel suit against Kühn.[17] While acknowledging having visited the camp, Heesters denied having performed as entertainment for the SS troops. In its ruling, the German court did not find that Kühn's allegations were true, but rather that too much time had passed for an accurate determination of fact to be made.[18]

Heesters worked extensively for UFA until almost the end of the Second World War (his last wartime movie being Die Fledermaus, produced in 1945) and easily made the transition from the Nazi-controlled cultural scene to post-war Germany and Austria, appearing again in a number of films. These included Die Jungfrau auf dem Dach and the 1957 version of Viktor und Viktoria. Heesters stopped making movies around 1960 to concentrate on stage and television appearances and on producing records.

In later years Heesters spoke fondly of Hitler as a person, but condemned his political stance.[19] In the 1990s, he and his wife toured Germany and Austria with Curth Flatow's play Ein gesegnetes Alter (A Blessed Age), which was also televised in 1996. On 5 December 2003, he celebrated his 100th birthday with a television special Eine Legende wird 100 (A legend turns 100) on the ARD television channel.

On his 100th birthday Heesters received the title "Kammersänger". In December 2004, aged 101, Heesters appeared in Stuttgart at the Komödie im Marquardt theatre in a show commissioned on the occasion of his 100th birthday, Heesters eine musikalische Hommage. In 2005 aged 102 he was featured as a soloist in a major concert tour with the Deutsches Filmorchester Babelsberg under the direction of Scott Lawton.

On 5 December 2006 Heesters celebrated his 103rd birthday with a concert at the Wiener Konzerthaus. On 5 December 2007 he celebrated his 104th birthday with a concert at the Admiralspalast, Berlin, and in February 2008 he performed in his home country for the first time in four decades amidst protests against his Nazi associations.

Heesters apologised for calling Adolf Hitler a "good chap" on the popular German TV show Wetten, dass..? on Saturday, 13 December 2008, aged 105. He said that he had said something stupid and horrible and asked for forgiveness.[20] In addition, German media suggested that he had failed to understand the show's satirical nature.[21]

Heesters became less active in his last years and played smaller roles, as he began to lose his eyesight due to macular degeneration and could not perform on stage for long periods of times. Unable to read a teleprompter, he had to memorize his lines before a show.

Heesters had two daughters by his first wife Louisa Ghijs, whom he married in 1930. After her death in 1985, he remarried in 1992; his second wife, Simone Rethel (born 1949), is a German actress, painter, and photographer. His younger daughter Nicole Heesters is a well-known actress in the German-speaking world, as is his granddaughter Saskia Fischer.

In December 2010, the 107-year-old Heesters announced that he had quit smoking for his then 61-year-old wife: "She should have me as long as possible."[22]

On 1 January 2008, he fell down some stairs in his holiday house in Tyrol and broke two ribs.[23]

On 29 November 2011, he suddenly fell ill, developing a fever, and was rushed into hospital.[24] He was operated on to fit a heart pacemaker and following a good recovery, was allowed home less than a week later, on 4 December, in time to spend his 108th birthday the next day with family. He did not feel strong enough to make the planned stage appearance to sing in celebration of his birthday and also had missed the premiere of his last film, Ten. Due to a relapse in his condition, on 17 December he was readmitted to hospital, where he subsequently suffered a stroke,[25] dying on Christmas Eve 2011.[26] He is survived by two daughters, five grandchildren, eleven great-grandchildren and three great-great-grandchildren.[27][28]

This article uses material from the article Johannes Heesters from the free encyclopedia Wikipedia and it is licensed under the GNU Free Documentation License.