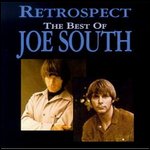 Joe South (born Joseph Alfred Souter; February 28, 1940 – September 5, 2012) was an American singer-songwriter, guitarist, and record producer. Best known for his songwriting, South won the Grammy Award for Song of the Year in 1970 for "Games People Play" and was again nominated for the award in 1972 for "Rose Garden".

South had met and was encouraged by Bill Lowery,[1] an Atlanta music publisher and radio personality. He began his recording career in Atlanta with the National Recording Corporation, where he served as staff guitarist along with other NRC artists Ray Stevens and Jerry Reed. South's earliest recordings have been re-released by NRC on CD. He soon returned to Nashville with The Manrando Group and then onto Charlie Wayne Felts Promotions. (Charlie Wayne Felts is the cousin of Rockabilly Hall of Fame Inductee and Grand Ole Opry Member, Narvel Felts.)

Billy Joe Royal recorded five South songs: "Down in the Boondocks" (also covered in 1969 by Penny DeHaven), "I Knew You When", "Yo-Yo" (later a hit for The Osmonds), "Hush" (later a hit for Deep Purple, Somebody's Image with Russell Morris, and Kula Shaker), and "Rose Garden" (see below).

Responding to late 1960s issues, South's style changed radically, most evident in his biggest single, 1969's pungent, no-nonsense "Games People Play" (purportedly inspired by Eric Berne's book of the same name), a hit on both sides of the Atlantic. Accompanied by a lush string sound, an organ, and brass, the production won the Grammy Award for Best Contemporary Song and the Grammy Award for Song of the Year. South followed up with "Birds of a Feather" (originally "Bubbled Under" at No. 106 on February 10–17, 1968, more successful as a cover by The Raiders that peaked on the Hot 100 at No. 23 on October 23–30, 1971) and two other soul-searchers, the back-to-nature "Don't It Make You Want to Go Home" (also covered eight months later by Brook Benton With The Dixie Flyers) and the socially provocative "Walk a Mile in My Shoes" (also covered by Elvis Presley in a Las Vegas era version, Bryan Ferry, and Coldcut).

The 1971 suicide of South's brother, Tommy, resulted in him becoming clinically depressed.[3] Tommy South had been his backing band's drummer and accompanied South not only in live performances but also on recording sessions when South produced hits for other artists, including Royal, Sandy Posey, and Friend and Lover, including their #10 Billboard hit song "Reach Out of the Darkness."[4] In an interview with Amy Duncan of Christian Science Monitor, South said, "I didn't see myself doing [drugs] for the kicks. I did it more or less to keep going, and to tap into inspiration. I equated the chemicals with the inspiration." South's drug use resulted in a surly attitude toward audiences, and he left Capitol after two unsuccessful albums. South lived for a time in the 1970s on the Hawaiian island of Maui. He said, "I really kicked myself around for years … one of the main hang-ups was I just refused to forgive myself," he told Duncan. "You know, you can go through drug treatment centers, and it's not a permanent healing until it's a spiritual healing."

No information is available about South's first marriage, divorce or his first wife. In 1987, South married his second wife, Jan Tant. South said his second marriage helped turn things around, and his wife Jan Tant's inspiration helped him return to writing songs and occasional appearances in public.

South fathered one child, son Craig South, who is a voice-over artist in Southern California.

South won two Grammy Awards, for Song of the Year and Best Contemporary Song, for the single "Games People Play," in 1969. South was inducted into the Nashville Songwriters Hall of Fame in 1979 and became a member of the Georgia Music Hall of Fame in 1981.[5]

In 1988, a Dutch DJ, Jan Donkers, interviewed South for VPRO-radio. The radio show[6] that aired the interview also played four new songs by South, but a new record was not released.

On September 13, 2003, South performed during the Georgia Music Hall of Fame induction ceremony and played with Buddy Buie, James B. Cobb, Jr., and Chips Moman.

South's final recording, "Oprah Cried", was made in 2009 and released as a bonus track on the re-release of the albums So the Seeds are Growing and A Look Inside on one CD.

South died at his home in Buford, Georgia, northeast of Atlanta, on September 5, 2012, of heart failure. He was 72.[7] Both Joe and his second wife, Jan Tant, who died in 1999, are buried in Mount Harmony Memorial Gardens Cemetery, in Mableton (Cobb County), Georgia.

This article uses material from the article Joe South from the free encyclopedia Wikipedia and it is licensed under the GNU Free Documentation License.