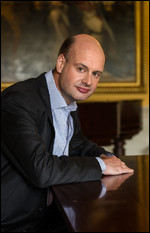 Layton was raised in Derby, where his father was a church organist. He was a chorister at Winchester Cathedral, and subsequently won scholarships to Eton College and then King's College, Cambridge as an organ scholar under Stephen Cleobury.[1]

Whilst studying at Cambridge, Layton founded the mixed-voice choir Polyphony in 1986.[2] He was appointed the musical director of the Holst Singers in 1993, replacing Hilary Davan Wetton, who had founded the group in 1978. Layton has served as assistant organist at Southwark Cathedral and musical director of Wokingham Choral Society. From 1997-2006, he was Director of Music at London's Temple Church, and from 1999-2004 he was Chief Conductor of the Netherlands Kammerkoor. From 2000-2012 he was Chief Guest Conductor of the Danish National Vocal Ensemble. Beginning in 1997, he served as organist and subsequently director of music at the Temple Church. In 2006, he became Director of Music at Trinity College, Cambridge.[1] In November 2009, the City of London Sinfonia announced the appointment of Layton as its second Artistic Director, effective with the 2010-2011 season, for an initial contract of 3 years. Layton is also to have the title of Principal Conductor.[3]

Layton has premiered new works and recordings by a number of composers including Arvo Pärt, Thomas Adès and James MacMillan. His realisation of John Taveners The Veil of the Temple was premiered in 2003 at The Temple Church London. It was subsequently performed in 2004 at the Royal Albert Hall during the BBC Proms, and in the Avery Fisher Hall, New York, as part of the Lincoln Center Festival.

Stephen Laytons discography on Hyperion[4] ranges from Handel and Bach with original instruments to Arvo Pärt, Pawe ukaszewski, Lauridsen, Whitacre and riks Eenvalds. Recordings with Polyphony include Gabriel Jackson,[5] Pawe ukaszewski,[6] Francis Poulenc,[7] John Tavener,[8] and riks Eenvalds.[9] He has received two Gramophone Awards in the UK and the Diapason dOr in France, The Echo Deutscher Musikpreis in Germany, The Compact Award in Spain, and four Grammy nominations in the USA.

This article uses material from the article Stephen Layton from the free encyclopedia Wikipedia and it is licensed under the GNU Free Documentation License.