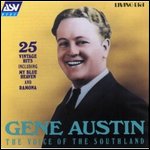 Gene Austin (June 24, 1900 – January 24, 1972) was an American singer and songwriter, one of the first "crooners". His 1920s compositions "When My Sugar Walks Down the Street" and "The Lonesome Road" became pop and jazz standards.

Austin was born as Lemeul Eugene Lucas in Gainesville, Texas (north of Dallas), to Nova Lucas (died 1943) and the former Serena Belle Harrell (died 1956). He took the name "Gene Austin" from his stepfather, Jim Austin, a blacksmith. Austin grew up in Minden, the seat of Webster Parish in northwestern Louisiana, located east of Shreveport. In Minden, he learned to play piano and guitar. He ran away from home at 15 and attended a vaudeville act in Houston, Texas, where the audience was allowed to come to the stage and sing. On a dare from his friends, Austin took the stage and sang for the first time since singing as a Southern Baptist choir boy. The audience response was overwhelming, and the vaudeville company immediately offered him a billed spot on their ticket.

Austin joined the U.S. Army at the age of 17 in hopes of being dispatched to Europe to fight in World War I. He was first stationed in New Orleans, where he played the piano at night in the city's notorious vice district. His familiarity with horses from helping his stepfather in his blacksmithing business also prompted the Army to assign Austin to the cavalry and send him to Mexico with General John Pershing's Pancho Villa expedition, for which he was awarded the Mexican Service Medal. Thereafter, he served in France in World War I.

On returning to the United States in 1919, Austin settled in Baltimore, Maryland, where he intended to study dentistry. Soon, however, he was playing piano and singing in local taverns. He started writing songs and formed a vaudeville act with Roy Bergere, with whom he wrote "How Come You Do Me Like You Do." The act ended when Bergere married. Austin worked briefly in a club owned by Lou Clayton, who later was a part of the famous vaudeville team Clayton, Jackson and Durante.

Colonel Tom Parker (1909-1997). A former carnival worker and sideshow talker, he gradually worked his way into the music business when he began to promote Gene Austin in 1938. From here be began book, promote and manage Nashville acts like Minnie Pearl, Eddy Arnold, Tommy Sands and Hank Snow. Then finally in 1955 became Elvis Presley's Manager [2]

In the 1940s, Austin and his singers toured the country in a 14-truck caravan with its own power plant and cook house. He stopped in Minden, Louisiana, and performed there in a popular tent show on the grounds of the local Coca-Cola plant owned by the Hunter family.[3]

In 1925, Austin recorded his popular song "When My Sugar Walks Down the Street" for the Victor Talking Machine Company in a duet with Aileen Stanley. Nathaniel Shilkret, in his autobiography, describes the events leading to the recording.[4] In the next decade with Victor, Austin sold over 80 million records – a total unmatched by a single artist for 40 years. Best sellers included "The Lonesome Road," "Riding Around in the Rain," and "Ramona."

With the advent of electronic recording, Austin, along with Rudy Vallee, Art Gillham, Nick Lucas, Johnny Marvin and Cliff Edwards, adopted an intimate, radio-friendly, close-miked style that took over from the full-voiced, stage-friendly style of tenor vocals popularized by such singers as Henry Burr and Billy Murray. Such later crooners as Bing Crosby, Frank Sinatra, and Russ Columbo all credited Austin with creating the musical genre that began their careers.

Gene Austin was an important pioneer crooner whose records in their day enjoyed record sales and the highest circulation. The Genial Texan ex-vaudevillian and would-be screen idol, Austin constitutes an underrated landmark in popular music history. He made a substantial number of influential recordings from the mid-1920s including a string of best-sellers. His 1926 "Bye Bye Blackbird" was in the year's top twenty records. George A. Whiting and Walter Donaldson’s "My Blue Heaven" was charted during 1928 for 26 weeks, stayed at #1 for 13, and sold over five million copies. It was awarded a gold disc by the RIAA.[5] Until Bing Crosby's "White Christmas" replaced it, it was the largest selling record of all time. In the hope of duplicating the success, this was quickly followed by "Ramona", an L. Wolfe Gilbert-Mabel Wayne song created for the 1927 romantic adventure film Ramona with Dolores del Río. It charted for 17 weeks, was #1 for eight and easily topped a million in sales. It also gained gold disc status.[6] Despite its longevity as a ballad, however, his next success, Joe Burke and Benny Davis’ 1928 song "Carolina Moon", did not quite measure up to its predecessors, albeit out of 14-weeks charted it stayed for seven at #1.[7]

Offered to work in Hollywood at the height of his career as the "Voice of the Southland", Austin appeared in several films, including Belle of the Nineties, Klondike Annie, Sadie McKee[8] – all 1934 releases, and My Little Chickadee (1940), at the request of his friend, Mae West.

Austin formed a trio with bassist Johnny Candido and guitarist Otto Heimel. They called themselves "Gene Austin and his Candy and Coco."[9] They had a radio series from 1932 to 1934.[10]

Gene Austin married his first wife, Kathryn Arnold, a dancer, in 1924 and divorced her in 1929. They had a child, Ann, born in 1928. Austin married his second wife, Agnes Antelline, in 1933, and their daughter Charlotte was born that same year. He and Agnes divorced in 1940. Austin then married actress Doris Sherrell in 1940, and divorced her in 1946. He married wife number four, LouCeil Hudson, a singer, in 1949, and the marriage lasted until 1966. Austin married Gigi Theodorea in 1967; this was his fifth and final marriage. Country music singer Tommy Overstreet, who had his biggest hits in the 1970s, is Austin's third cousin.

In 1956, CBS made a television drama about Austin's life. In 1962, Austin campaigned unsuccessfully for the Democratic nomination for governor of Nevada. He polled only 5,017 votes (10.21 percent) to his opponent, Grant Sawyer, who received 40,168 ballots (81.4 percent) Sawyer then won the governorship by a nearly 2–1 margin over weak Republican opposition in the fall campaign.

Austin had retired to Palm Springs, in the late 1950s and had been active in civic boards there until 1970. Income from his record sales allowed him to live comfortably the rest of his life. He died in Palm Springs of lung cancer and was interred in the Forest Lawn Memorial Park Cemetery in Glendale, California. He was a godfather of country singer David Houston, who like Austin also lived in Minden, Louisiana, during his youth.

In 2005, Gene Austin's 1926 Victor recording, Victor 20044, of "Bye Bye Blackbird", was inducted into the Grammy Hall of Fame, a recording which has long been considered a definitive rendition of that song.

This article uses material from the article Gene Austin from the free encyclopedia Wikipedia and it is licensed under the GNU Free Documentation License.