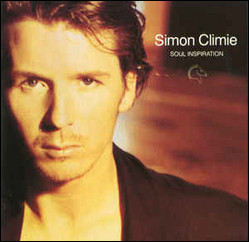 Simon Climie (born 7 April 1957[2]) is an English songwriter/producer and the former lead singer of the UK duo Climie Fisher.

Climie was born in London. He formed Climie Fisher together with Rob Fisher, whom he had met when they were both session musicians at Abbey Road Studios.[3] Climie Fisher had hits in more than 35 territories – and number ones in some – with "Love Changes (Everything)", which won an Ivor Novello Award,[4][5] "Rise to the Occasion", "This Is Me" and many other songs.

After leaving EMI and the final Climie Fisher album Coming in for the Kill, Climie signed to Sony's Columbia label as a solo artist, releasing an album called Soul Inspiration in 1992.[6]

From the mid-90s Climie expanded to production, producing and writing songs for a number of artists, including Eternal, Louise Redknapp, B.B. King, Michael McDonald and Zucchero Fornaciari.

In Climie's first couple of years as a songwriter, he had songs recorded by George Michael and Aretha Franklin, Pat Benatar, Smokey Robinson and Jeff Beck, which established him as a world-class international talent. Then, on the fringes of session work, he did the Fairlight programming for Scritti Politti's legendary album Cupid & Psyche.

George Michael and Aretha Franklin's single "I Knew You Were Waiting (For Me)" reached number one worldwide, including in the UK Singles Chart and on the US Billboard Hot 100. Following this, Climie continued to have success with his songs, including "You're Not Alone", which featured on Amy Grant's Heart in Motion, which sold more than five million copies worldwide – the biggest-selling Christian album of all time.

Climie is also known for his Grammy Award-winning work as a collaborator with Eric Clapton on many Platinum albums, including Pilgrim, Reptile, Riding with the King, Me And Mr Johnson, Back Home and The Road to Escondido.

During this time he produced Platinum albums for other artists, including Michael McDonald's renowned Motown, Motown II and Soul Speak. The latter featured collaborations with Stevie Wonder and Toni Braxton, while the Grammy-nominated Motown spawned the huge US hit "Ain't No Mountain High Enough".

In 2011 success continued with Climie's songs. Sara Evans was in the American country music charts for more than six months with "My Heart Can't Tell You No", and Chris Medina – who had already reached number one in a number of territories round the world with his first single – collaborated with Climie on his second single, "One More Time", and several songs on the album What Are Words.

Together with U2 founder member Larry Mullen, Jr., Climie has co-written the movie score and theme for Man on the Train (2011 TriBeCa Productions film) in which Larry stars with Donald Sutherland.[7]

He went on to work with Eric Clapton and produce a number of Grammy Award-winning albums for Eric Clapton, acting as producer and co-writer. Climie also contributed keyboards and programming to Clapton's Pilgrim.

Climie also worked with Clapton, on Clapton and JJ Cale's album The Road to Escondido, released in 2006. Apart from Clapton, he also worked with former Doobie Brothers member Michael McDonald on his Motown albums, and the other artists listed above.

In 2013, he worked on production and mixing of Eric Clapton's album Old Sock,[8] which shot to number one in the American Billboard Independent Chart in March 2013 [9] after hitting number seven in the Billboard 200 [10] In 2014 Climie was co-producer with Clapton of the album The Breeze: An Appreciation of JJ Cale, a tribute to Clapton's long time friend, the late singer/songwriter J.J. Cale; a project on which Mark Knopfler, Don White, John Mayer, Willie Nelson, Derek Trucks, and many others made significant contributions.

In 2016, Climie was the co-producer with Clapton on the album Live in San Diego which was recorded during the "Doyle & Derek World Tour" in 2007.

Climie is the son of David Climie, co-writer of the popular 1960s and 1970s television comedy series, Oh, Brother!, which starred Derek Nimmo.[11] as well as Lulu's Back in Town (see Lulu), the comedy series Bootsie and Snudge, Backs to the Land, Wodehouse Playhouse, That Was The Week That Was, The Army Game, the sci-fi series Out of the Unknown, the radio version of Whack-O! and the comedy film Desert Mice. (See David Climie in IMDB)

Includes songs and albums Climie has written, performed and/or produced.

TDF was a dance act project featuring Climie and Eric Clapton, with Clapton working under the name of x-sample. "TDF" is an acronym for Totally Dysfunctional Family.[12] The project released one album called Retail Therapy on the Reprise record label. The title supposedly alludes to Clapton's "addiction" to buying clothes.[13] Eric Clapton states in his autobiography that he persuaded Giorgio Armani, a friend of Clapton's, to let them do the music for one of his fashion shows.[14]

This article uses material from the article Simon Climie from the free encyclopedia Wikipedia and it is licensed under the GNU Free Documentation License.