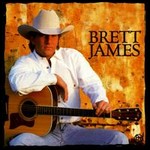 Brett James Cornelius (born June 5, 1968) is an American singer, songwriter, and record producer. Signed to Career Records (a division of Arista Nashville) as a solo artist in 1995, James charted three singles and released a self-titled debut album that year. He returned to Arista as a recording artist in 2002, releasing two more singles.

Since the early 2000s, James has become known primarily as a songwriter for other country and pop music artists. Among his compositions is Carrie Underwood's 2006 Number One hit "Jesus, Take the Wheel," which received Grammy Awards for Best Female Country Vocal Performance and Best Country Song. His writers' credits also include Number One hits for Jessica Andrews, Martina McBride, Kenny Chesney, Rodney Atkins, and Jason Aldean.

Brett James Cornelius was born June 5, 1968 in Columbia, Missouri to the late Carolyn and Dr.Sam Cornelius, graduating from Christian Heritage Academy high-school in Del City, Oklahoma in 1985. After leaving medical school in 1992, James began his musical career as a recording artist on Career Records, a subsidiary of Arista Nashville, in 1995. That year, he released his self-titled debut album, which included the charting singles "Female Bonding," "If I Could See Love" and "Worth the Fall."[1] Also included on this album was "Wake Up and Smell the Whiskey", which was co-written and later released as a single by Dean Miller in 1997.

In addition, he appeared on two compilation albums issued by Arista Nashville. The first of these was 1996's Star of Wonder: A Country Christmas, on which he sang "White Christmas,"[2] and the other was a country-gospel album entitled Peace in the Valley, to which he contributed a recording of "What a Friend We Have in Jesus." This latter album was also promoted via a special on The Nashville Network (TNN), now Spike.[3] In 1998, James and Tammy Graham were both dropped from Career Records when it merged with Arista Nashville.[4]

James returned to his singing career in the early 2000s. After declining to join the band Sixwire,[5] he re-signed with Arista Nashville and began working with producer Dann Huff.[6] Although he charted in the top 40 of the Hot Country Songs charts with "Chasing Amy" and "After All", he never released a full album.[1]

After taking time off to raise his family, James attended University of Oklahoma medical school again until 2000.[7] He began writing singles for other artists in the early 2000s, including the Number One hits "Who I Am" by Jessica Andrews and "Blessed" by Martina McBride.[7]

He continued to write for other artists, with two more of his co-writes topping the charts: "When the Sun Goes Down" by Kenny Chesney and Uncle Kracker, and "Jesus, Take the Wheel" by Carrie Underwood, in 2004 and 2006 respectively. "Jesus, Take the Wheel" also won a Grammy Award for Best Female Country Vocal Performance and Best Country Song, the latter of which was awarded to James and the song's other two songwriters.[8] Rodney Atkins' "It's America", Chesney's "Out Last Night" and Carrie Underwood's "Cowboy Casanova", all co-written by James, also topped the country charts in 2009. In 2010 James charted number one with Jason Aldean's "The Truth" and Chris Young's "The Man I Want to Be". ASCAP named James their country songwriter of the year in 2006 and again in 2010. Non-country artists who have recorded his works include Kelly Clarkson, Backstreet Boys, Bon Jovi and Paulina Rubio. James also co-wrote American Idol season 10 winner Scotty McCreery's debut single "I Love You This Big".

In 2008, James also began working as a record producer, with his production credits including Gracin's We Weren't Crazy, Kristy Lee Cook's Why Wait,[9] a re-release of Taylor Swift's self-titled debut album, Jessica Simpson's Do You Know and Kip Moore's Up All Night.

James' songwriting credits include seven Number One hits. Besides these, he has co-written several other Top Ten country hits, including cuts by Rascal Flatts, Josh Gracin, Sara Evans, Tim McGraw and others.

This article uses material from the article Brett James from the free encyclopedia Wikipedia and it is licensed under the GNU Free Documentation License.