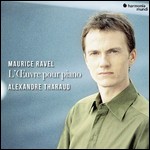 Alexandre Tharaud (born 9 December 1968) is a French pianist. He is active on the concert stage and has released a large and diverse discography.[1]

Born in Paris, Tharaud discovered the music scene through his mother who was a dance teacher at the Opéra de Paris, and his father, an amateur director and singer of operettas. Tharaud thus appeared as a child in theatres around northern France, where the family spent many weekends.[2] His grandfather was a violinist in Paris in the 1920s and 1930s.[3] At the initiative of his parents, Alexandre started his piano studies at the age of five, and he entered Conservatory of the 14th Arrondissement, where his teacher was Carmen Taccon-Devenat, a student of Marguerite Long.[2]

He entered the Conservatoire de Paris at the age of 14 where he won first prize for piano in the class of Germaine Mounier when he was 17 years old. With Theodor Paraskivesco, he mastered the piano, and he sought and received advice from Claude Helffer, Leon Fleisher and Nikita Magaloff. In 1987, he won third prize at the International Maria Canals Competition in Barcelona[1] and, a year later, the Senigallia Competition in Italy. In 1989, he was awarded 2nd prize at the Munich International Competition. His career developed quickly in Europe as well as in North America and Japan.

In 2009, he took part in a show devoted to Erik Satie with actor François Morel.[4] Alongside the singer Juliette, he organised a Satie Day at the Cité de la musique, recorded for France Télévisions. He has also worked with the French composer Thierry Pécou, performing the première of his first piano concerto in October 2006 at the Théâtre des Champs-Élysées and later recording it.[5]

In 2012, Tharaud took part in the French film Amour by Michael Haneke where he played himself, alongside Jean-Louis Trintignant, Emmanuelle Riva and Isabelle Huppert, although he said that it would not be the start of a film career for him.[3]

The New York Times described his Bach playing at a recital in 2005 as "crisply articulated and vividly etched".[6]

In 2015 Tharaud starred as the central performer at the Prinsengrachtconcert in Amsterdam.

Tharaud refuses to keep a piano in his residence[5][7] because of his belief that he will begin to prefer the pleasure of improvisation to the necessity of rigorous work. He prefers to practice on different instruments at friends' residences. He composes, but is usually discreet regarding this activity.[8] Before each recording he goes and lays flowers at the tomb of Chabrier in the Montparnasse Cemetery.[1] When asked what a camera would record if it were present at his recording sessions, he replied that he sings, shouts, dances, and argues with the piano ("absurd behaviour - comportements ridicules").[1]

This article uses material from the article Alexandre Tharaud from the free encyclopedia Wikipedia and it is licensed under the GNU Free Documentation License.