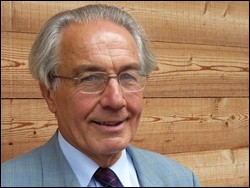 Born in Basel, Rickenbacher studied at the Berlin Conservatory with Herbert von Karajan. He took part in master classes with Pierre Boulez. He was an assistant conductor at the Zürich Opera from 1966 to 1969. He served as first Kapellmeister of the Stadt Buhnen Freiburg from 1969 to 1975. He was music director of the Westphalian Symphony Orchestra from 1976 to 1985.[1] He was chief conductor of the BBC Scottish Symphony Orchestra from 1978 to 1980. He was appointed principal guest conductor of the Belgian BRT Philharmonic Orchestra in 1987.

This article uses material from the article Karl Anton Rickenbacher from the free encyclopedia Wikipedia and it is licensed under the GNU Free Documentation License.