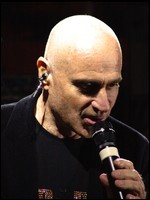 From Wikipedia, the free encyclopedia.
Edoardo Vianello (born 24 June 1938) is an Italian singer, composer and actor. He's considered one of the most popular Italian singers of the Sixties.[1] SIAE estimated a sale of over 50 million records worldwide.[2]

Born in Rome, Vianello started his career in 1956.[3] He obtained his first successes in 1961, with Il capello and Pinne fucile ed occhiali,[3] that ranked 2 in the Italian Hit Parade.[4] Later he obtained several more great successes (including Guarda come dondolo, Abbronzatissima and O mio signore which charted 1 and I Watussi which charted 3)[4] until the second half of 60's.[3] After a less successful period, he re-launched his career in the 70's founding the duo Vianella with his wife Wilma Goich.[3] The main hit of the period was Semo gente de borgata, which ranked 7 in Hit Parade.[4] In late 70's he reprised his solo career.

This article uses material from the article Edoardo Vianello from the free encyclopedia Wikipedia and it is licensed under the GNU Free Documentation License.